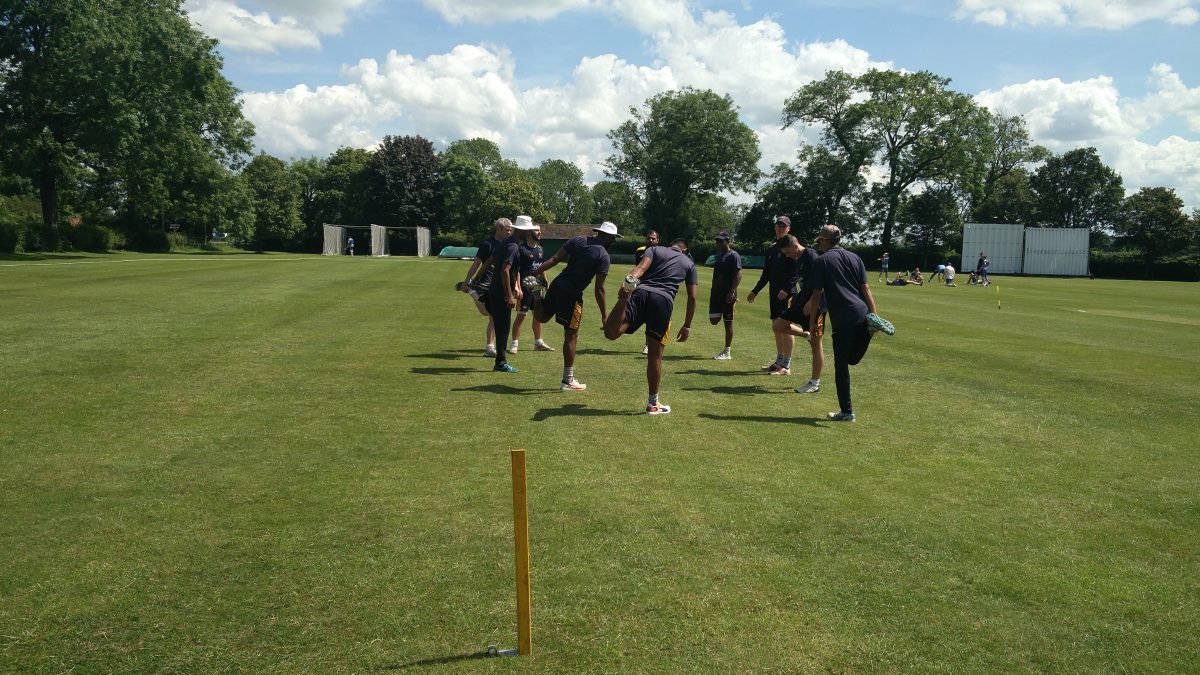 My driver to the match was confused as to why we were playing a Warwickshire League match against Blaby which he knew was in Leicestershire, because as a younger man he had played there. However, his confusion disappeared when he was directed to Barby in Northamptonshire. That made sense.

Barby Cricket Club is a super place to spend a warm, sunny afternoon. It is a big, rural ground surrounded by trees and we were given a most hospitable welcome.

Barby ensured that we had a reasonably long match by asking Walmley to bat. Mr Sheikh pushed the first ball gently to silly point and broke his bat. That was the most exciting thing that happened until the end of the fifth over when Brommers (Dan Bromley) gave up trying to late cut every ball, and only succeeding in finding mid-on, by aiming to hit the ball into the trees behind the bowler. The ball had other ideas and hit some pieces of wood behind Brommers. Mr Sheikh used the next 25 overs to gently ‘knock in’ his new bat while Roshan Balaji was showing his senior partner great respect in trying not to outscore him.

During this boring partnership spectators in the pavilion debated whether blue painted stumps infringed the Spirit of Cricket. Opinions were divided, but the conversation progressed to describe ‘stumps I have known’. We learned of a design in use in the 1940s which was bound with a brass ferrule at the bail end and the pointed end was made of steel. It was thought that these days such a stump would be regarded as an offensive weapon. This led to a discussion as to why baseball bats are frowned on by the police while cricket bats are thought of as harmless.

This conversation ceased when Roshan became adventurous and holed out and Mr S reached 50 and decided his bat was now ready for some violence. It was fun while it lasted but he left with 64 to his name and the score on 151 after 35 overs. Sammi (Sarmad Bhatti) and Mikey (Michael Waugh) put their feet on the accelerator and scored at about 10 an over so that Walmley were able to finish with 284 for 5. Sammi scored 70 and Mikey 65*. Newis and Gordon contributed little despite the latter’s intention to hit the ball into Warwickshire.

There is little to write about the Barby innings. Once again Fammi (Fahim Jan) spoilt the match with 5 for 17. Gordon was expensive (in the context of this match) with 2 for 24. Dinuk, under the keen gaze of two senior generations of de Silvas, took his first wicket for Walmley Firsts. Jamie Hall was as difficult to get away as usual and appeared to suffer from some inattention by slip fielders. Bilal (Hussain) took two catches, one of which was so sharp it took the umpires by surprise. He was unable to finish his initial over as he has an ability rare among bowlers of persuading batsmen to run themselves out, and Barby ran out of batsmen.