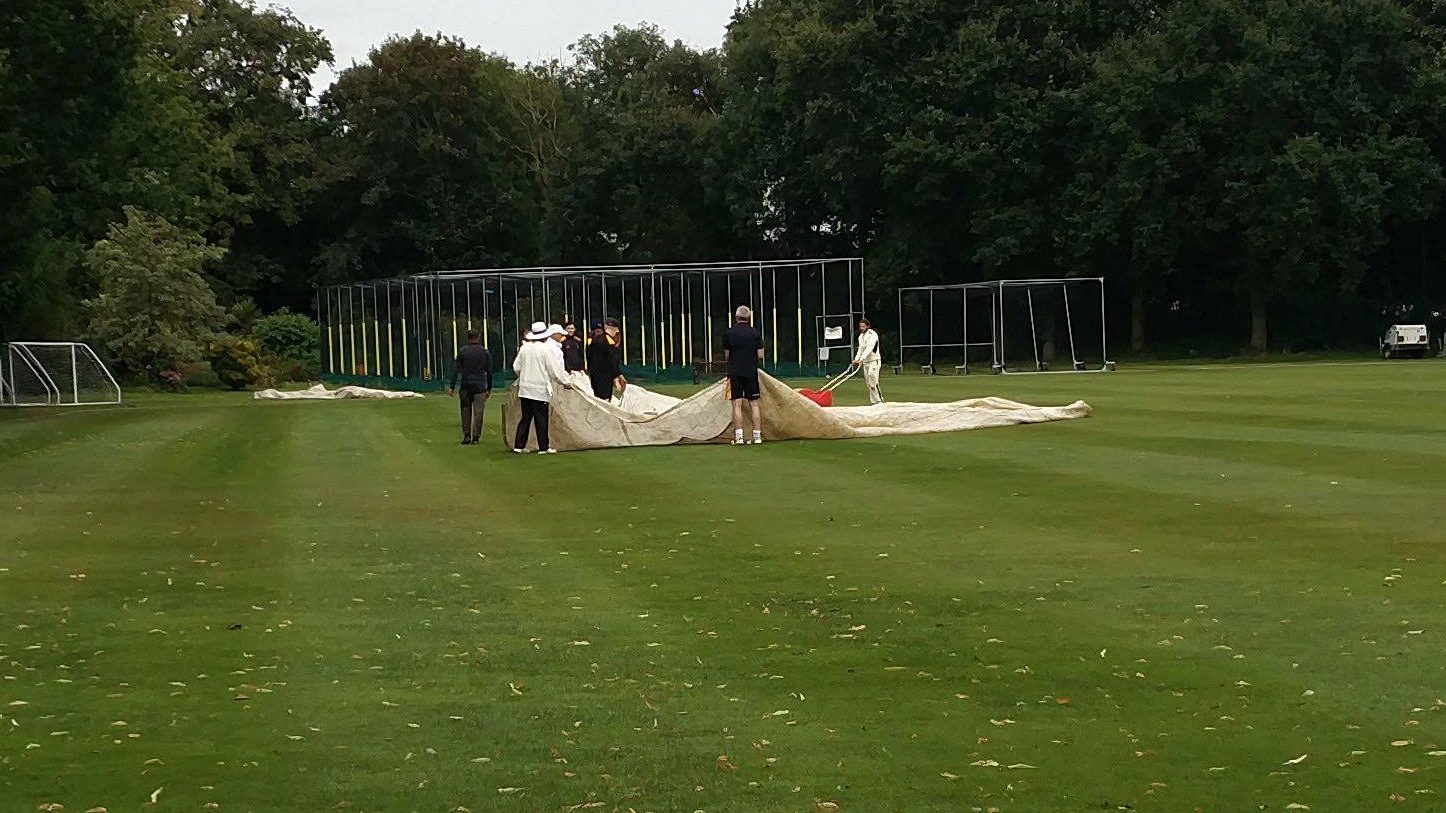 For most of the season Walmley have talked of this match as the one that would confirm their success, or otherwise. Our match against Bedworth away earlier in the season was rained off even after attempts by both teams and the umpires to get the ground fit for play. Bedworth led the table for much of the summer and even when Walmley took a small lead they were still close. However when Saturday dawned Attock had become our nearest rivals although, as the miseries in the Media Centre (Oldest Member and Marathon Walker in Shorts) insisted, Bedworth could still win the league. As the weather forecast suggested the strong possibility of rain nothing could be taken for granted.

Sure enough, half an hour before play was due to start it was raining and covers and sheets were spread over the square bowlers’ run-ups and old wicket ends. However the sky lightened, the rain stopped and the game, reduced to 49 overs per side, was able to start only eight minutes late. Bedworth won the toss and asked Walmley to bat. This gave Walmley the possibility of 24 points. This was significant, since it was understood that Attock also had the potential of getting 24 points in their match against Sutton Coldfield.

Dan Bromley opened the innings with yet another partner, on this occasion the prodigal son Andrew Hendry. It was not a particularly successful experiment as with 30 runs on the board Roshan Balaji was at the crease and together with Dan these two took the score to 92. At some point during this partnership the heavens opened and about an hour and a half’s playing time was lost. When play was able to resume Walmley’s innings remained at 49 overs and Bedworth were to have 32 overs when they batted.

It was evident that Walmley had decided to score runs as quickly as possible in order to declare and get extra overs in which to bowl out Bedworth. The result was that we saw Sarmad Bhatti and Michael Waugh get out to uncharacteristic poor strokes. Roshan batted well until, when on 54, he attempted an optimistic second run and failed to beat the throw. Jonathan Newis played the sort of innings which those who admire him know he is capable of but which previously this season he has kept for his Sunday team and floodlit matches. His 50 was scored off 45 balls and contained one four and, unsurprisingly, three sixes. The rest of the innings was largely unremarkable except for the appearance at the crease of Fahim Jan. I think it was the first time this season that he has been seen wearing pads, despite having assured me on many occasions that he was in prime batting form. It was no surprise therefore that he hit his first ball for six and Walmley finished with 237 for 9. This meant that Bedworth needed 238 to win, 186 to get a winning draw and 150 to reduced Walmley’s winning draw to 8 points instead of 10.

The Brothers Parnell opened the innings for Bedworth and were untroubled in an opening partnership of 106 but three wickets fell at this score, two to the bowling of Sarmad Bhatti and one to Dinuk de Silva. Jamie Hall took two catches, one of them worthy of Stokes (Ben, not Barry). Two further wickets fell before the Bedworth innings finished on 152 for 5.

This gave Walmley 13 points. At Attock Lee Thomason did Walmley a great service by keeping Attock at bay with a personal score of 115 not out. Walmley now lead Attock by 15 points so 10 points in the final league match next Saturday will guarantee qualification for the play-offs for a place in the Birmingham League.