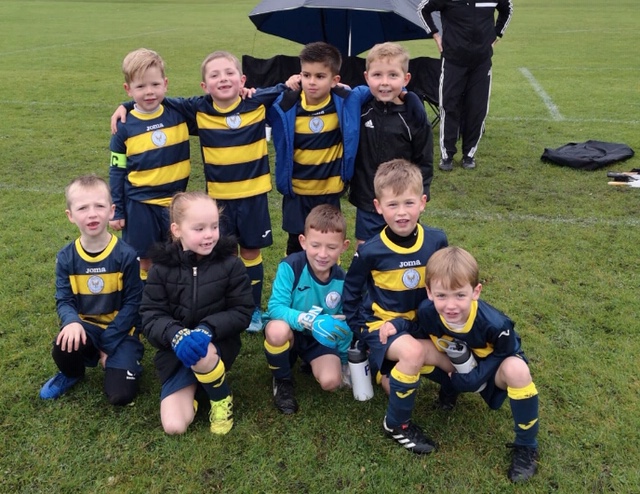 The pitches at Walmley Cricket & Sports Club are ready for us, the goal posts cemented in, the corner flags up and flying but this rain keeps coming and the games called off at Walmley but the good old trusty pitch at Streetly Community Centre is waiting. The Gaffer got the pans on the boil to fill the hot flasks (didn’t blow all the fuses in the kitchen this time!) and off we went…

Kick Off: The rain stopped, the brollies were down and the game was on! Studley kicked off the first half going up the hill, Colron were quick off the mark as usual and intercepted play with Henry and Zaine both going forward well and making some lovely passes. Studley made a good run forward but there was no getting past Parker, he tackled well and passed the ball down the pitch, Zaine latched onto the pass and knocked the ball into Henry who calmly slotted the ball past the oncoming Studley Keeper. The match re-started and quickly Colron were attacking again, the ball went out to Henry on the left wing, who superbly flicked the ball over the oncoming defender’s leg to Charlie who hit it half volley into the back of the net, 2 goals in 2 minutes.

Studley then had a corner, our players marked up and it was caught well by Joe who had a great first half in goal, he kicked it out quickly to Zaine who made a nice run but was intercepted by Studley, the ball came back up the pitch where Charlie stopped it and took a shot with the keeper being off his line, the ball just fell short of the goal.

A few managerial changes were made putting Tommy on upfront for Zaine who hadn’t stopped running and Mason for Parker at the back. Tommy picked up where Zaine left off and made some great tackles and held the ball up well with some lovely passes.

Studley made a quick attack and slotted the ball into the back on the net. Studley started putting the pressure on Colron. Another change was made giving Henry a breather as he hadn’t stopped running and bringing Millie on, Millie slotted upfront with Tommy dropping into Midfield. Colron were attacking and Studley were getting physical with lots of pushing and shoving going on which the ref just waved on giving us advantage rather than free kicks, the manager did point out to the ref that he would prefer the free kicks rather than advantage.

Studley then made a breakthrough and got another goal. Half time was upon us.

Colron Kicked off the 2nd half, the rain was still holding off. A few changes where made at half time, Henry went in goal for Joe, Joe took over defence from Mason, Zac upfront, Zaine and Tommy in midfield. Colron started fast as normal, passing the ball around the pitch nicely, Colron got given a free kick after a harsh foul on Zac. Tommy stepped up to take the kick which he sweetly hit with his right foot and looked to be going in top corner but the Studley players back got in the way and sent it out for a corner.

Zac made one of his weaving runs in and out of the Studley players whilst Tommy was holding his own making some fantastic tackles in midfield and stopping the Studley attacks. Zaine had a lovely run up through the middle of the pitch but had 2 players tackling him and making it hard to get through.

Studley had a few chances in quick succession, but Henry kept the ball out of the net. With Studley going down hill they had a slight advantage and Colron were running out of steam, Studley made a few passes and got another goal.

The Gaffer went for a quick change with Mason offering to go in goal for Henry and Millie going on upfront and Parker at the back. Tommy and Joe were getting the ball upfront to Millie who was holding it up well. Charlie and Henry were given a quick warm up on the side and swapped places with Tommy and Joe who had ran their socks off, couldn’t tell if it was sweat or rain!

Studley made a run down the wing and into the box, Mason came running off his goal line and kicked the ball away stopping the Studley attack.

Now Studley were struggling and running out of steam, the game was drawing to a close and the ball got passed up to Millie who went through one on one, the Studley player bought her down leaving his imprint of the top of her thigh, Millie in true heroic style got back up and carried on. The ref gave us a free kick outside the box, Charlie stepped up to take it, with a short run up he smacked the ball which deflected off a Studley player and into the back of the net……BOOM!

The ref now playing extra time let play run on and on, Studley had a last-ditch attempt against a tired Colron team and scored the late winner.

The Colron Team played great football today, the passing was great, the team work and how well the kids get on is showing on the pitch as they work for each other. Team work makes the dream work.

Player of the Match was deservedly given to Henry who played well in midfield and in goal today, he worked tirelessly running up and down the wing and took his goal well.

Words from the Manager

We came up against a strong and physical opposition, the whole team put a real shift in and will know they have been in a battle today each and everyone of them continues to progress and are playing some really good football well above their years. Shout out to Liam today who was a good sounding board and help on the side. Bring on next weekend!