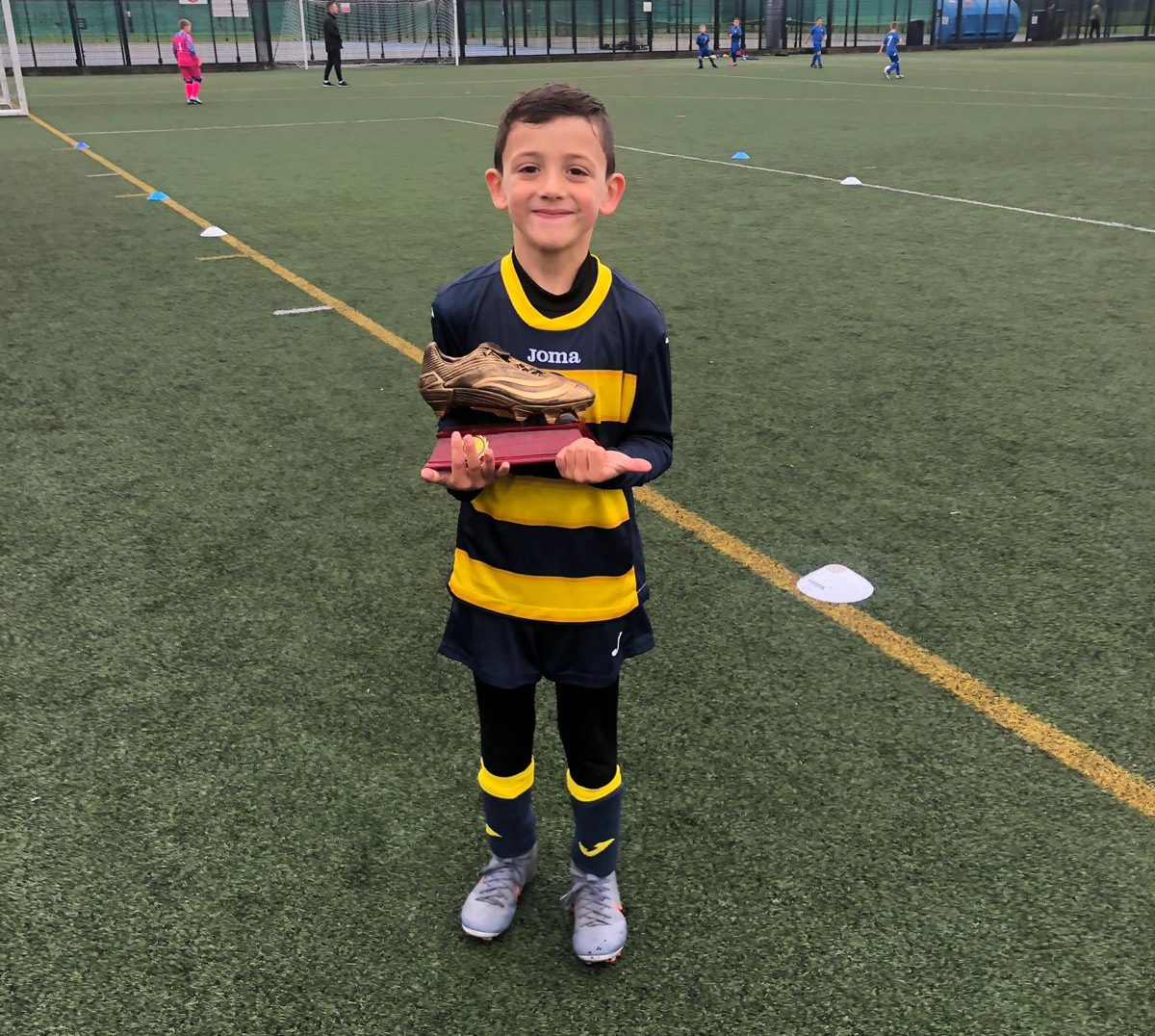 The rain has stopped, and I can write my notes without the pen going through the wet pages of my book.

The game starts with Captain Jake and Ollie, Zac R, Cohen and Kyrie in goal. In a quick pace game for Colron Blues, Cohen takes on a long run from the start of the game passing well to Zac who continues the run to be intercepted by Ace FC.

The play ends in the Colron end and with a few passes and retrieves from each team the ball lands to an Ace player and it’s in the net. 1 goal down.
The players are not fazed, in fact their heads are up and they power through. Zac has a few end to end runs and then he remembers to look up for his teammates.

Zac takes on a rare powerful challenge and passes to Cohen who is clear, shot on goal but wide.

Zac R then blasts the ball through open space but no luck today.

Cohen takes on the whole defence to battle the ball to Zac who is unmarked but no joy. Cohen has a drive to take on the whole Ace team throughout this first half and is relentless never giving up on his plan.

After much of the play being in the Colron end, Ace make a move to goal and it is cleared confidently by Kyrie.

Ollie moves in on the tackles to receive the ball and burst through the defence to pass to his teammates.

Ollie/ Zac and Cohen have now joined forced to take on Ace FC as a team. The game forces lots of throw ins Colron’s way. A throw in from Cohen to Zac sees another shot on target saved.

Kyrie was ready and waiting in goal but this half your teammates attacked well, holding much possession.

Team for second half is Tyler, Fisayo, Zak A, Conner in Goal and Jake captain.

The half starts fast and furious and Zak A has the ball and with some fancy feet and quick turns is down the line before the opposition realise and a shot on target, but a save.

Tyler takes on the game in a similar style to the previous game but with more run ons. Tyler receives the ball, turns to Fisayo who battles to get through.

Fisayo takes an impeccable throw in to his team and with another attack on goal the Ace’s are unnerved.

Jake takes on his powerhouse stand in defence and nothing is coming past him. He is amazing even the Ace coach is shouting don’t let number 10 move.
Jake takes a free kick which falls to Fisayo feet, he runs in perfect rhythm down the field and its wide. This is repeated again 1 minute later and again wide. We have all the possession and no reward for the effort.
Zak A continued his quick skilful feet in keeping many balls in play to keep the Ace team fearful of his next move.

The Ace team finally get through but Conner makes a perfect save as he dives and gets his finger tips to the ball to push it out wide.

A hugely unlucky defeat, It was all Colron’s possession but no luck. Well done you played well.

This week’s Player of the match goes to Zak A for your determination and relentless tackles. Well done Zak.