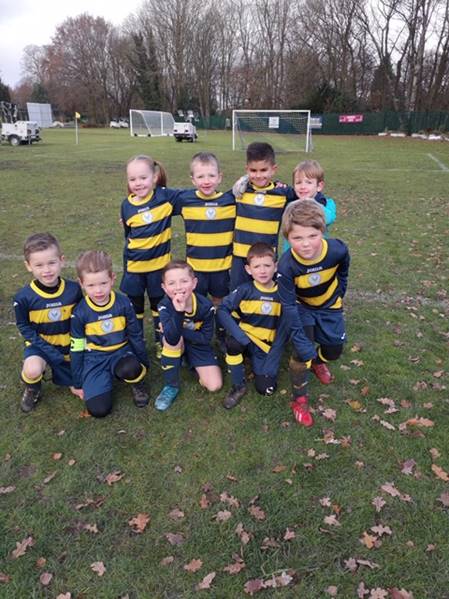 The day had finally arrived, the overnight rain had drained away and it was time to finally play at Eldon drive, teas and coffee were being served along with bacon cobs!

Warm up and team talk complete and we were off, and they were straight into action with the first attack seeing Charlie brought down in the box, penalty, Charlie dusted himself off and dispatched the penalty kick.

Not happy the Sutton team started to mount their attacks, but Parker was there with some solid tackles, getting the ball into midfield with Ruben having some excellent runs and getting the ball up to Henry who was too quick for the Sutton defence and was unlucky not to score.

Sutton came again and managed to get through but Joe pulled off a string of excellent saves, nothing was going in the Colron net past Joe today!

With Zaine and Mason now on Colron had some fresh legs, Mason stopping the Sutton attacks and Zaine was soon through only to be stopped, but the ball was out for a corner, Charlie whipped the ball in and a Sutton player turned it into his own net.

Mille and Zak now entered the field, Mille was soon closing down and holding the ball up well, Zak picked up the ball in the area and went on his trade mark mazey run, only to be stopped by the half time whistle! HT and Colron in the lead.

The second half started as the team left off, Henry through 1 on 1, bang, the net nearly broke! Great finish Henry!

Parker still solid at the back, and backed up by Zak in goal who dealt with 2 or 3 shots on goal superbly.

Joe upfront now and he was soon causing problems, one off the post and some narrowly missed chances.

Charlie’s turn to have an effort off the post and then Ruben coming close.

Zaine was back on the pitch after a pep talk from the gaffer. I’m not sure what was said but 3 quick fire goals including a thunderbolt from the edge of the box helped him to a hat trick.

The gaffer decided to mix it up again, Henry at the back, Parker in midfield, Mille back upfront, it was really turning into a proper squad performance.

Sutton grabbed a conciliation goal but that didn’t spoil an excellent performance from the team with some excellent team and individual goals as well as a solid defensive performance.

Player of the Week

Rob (Ruben’s uncle) picked player of the week, with both Zaine and Henry close contenders, but Joe was picked for his first half keeper display as well as his upfront performance in the second half, well done Joe!

Words from the Gaffer

It was great to finally play at the cricket club, the highlight being the bacon sandwich after the game!

The team played really well today, we worked hard on defence play at training so it was great to only concede one goal with both keepers playing well, and as normal we find goals easy to score with our attacking riches, now over 60 for the season! the whole team are really improving well.

Looking forward to the last game of the year next week, well done everyone!