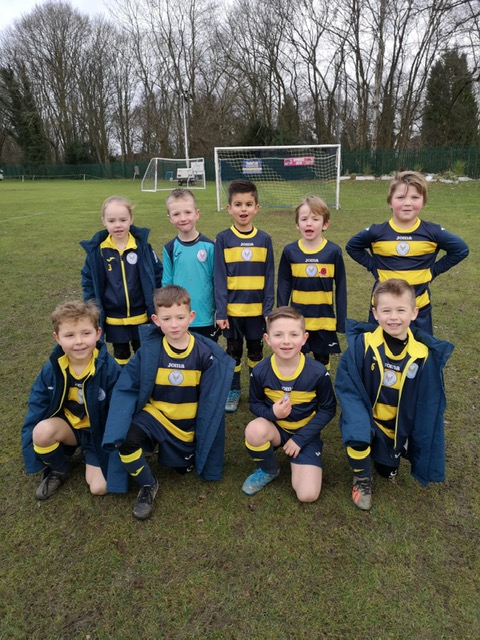 The first game of the New Year and we are at Walmley, but due to illness no breakfast cobs, much to a few dads’ disgust!

After a few weeks off and lots of Christmas pudding the gaffer was thinking the team would start slow… definitely not the case!

Captain for the day, Henry, and Zaine both scoring doubles within 10 min put the team 4 up!

Delightful forward play from the two, with Reuben also commanding midfield and threading passes through whilst being his normal solid self at the back, Parker also being disciplined mopping up anything and putting some solid tackles in.

Time for some changes, Tommy, Joe, Mille, Mason entering the field of play, this disrupted the flow of the game and Northfield came back with 3 quick fire goals that Zac couldn’t do anything about in goal.

The team found their feet again and Joe was put through after some great chasing down and a pass by Mille but Joe was brought down, with no Charlie due to chickenpox it was Tommy who took on free kick duty and he didn’t disappoint smashing the ball into the net to gain a 2 goal advantage at HT only after some last ditch solid tackling by mason to stop the Northfield advances.

A few pointers at HT and the teams were back out, Joe in goal, Parker in defence, Reuben and Henry in midfield and Mille up top.

We need to check what was in Henry’s half time drink as the game restarted he quickly added 4 (yes 4) to his 2 first half goals, in what can only be described as awesome attacking play by the team.

Reuben again effortlessly passing the ball through the opposition, Millie was making herself busy holding the ball up and Henry was calmly dispatching the ball into the net!

Joe and Parker were again sticking to their jobs at the back.

Tommy’s turn upfront now, and was soon in the action with a couple of close efforts before taking on defensive duties with Mason on and Parker off.

Mason was quick into the action and was very close to scoring his first goal.

But Reuben was next on the score sheet turning from supplier to scorer with a well taken drive across the keeper into the bottom corner.

Zac was now on and was up to his trade make mazy runs, narrowly going wide before his persistence paid off and he added a goal to his and the team’s tally

And it wasn’t finished there with Zaine not happy with his 2 first half goals he finished the days scoring off with one more.

An excellent all round performance by the team, devastating going forward whilst still keeping it solid at the back.

Player of the match goes to Henry, calmly taken goals, much more relaxed with his finishing today, well done!

Quote of the Day

Quote of the day just after the final whistle “have we won?” – Tommy C!