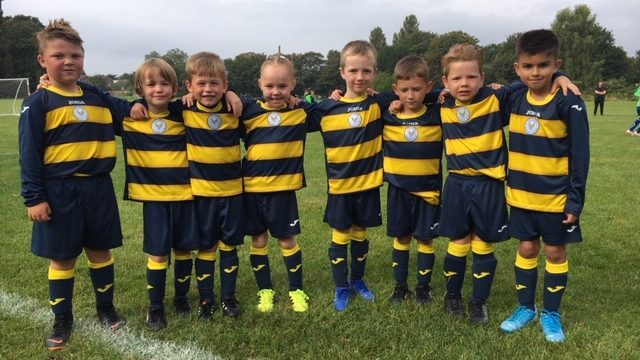 Right from the kick off, it was clear to see that this would be Colron Yellows’ toughest test yet this season, against a physical and athletic Phoenix team. The early exchanges saw Colron take command of possession – but it was obvious that Phoenix were very dangerous on the break. The Yellows produced several good chances and should have taken the lead when Zaine showed some great footwork to release Charlie, whose shot was well saved by the Phoenix keeper. The pattern was set and the Phoenix goalkeeper was kept busy with more Colron Yellows’ attacking play. Zaine this time bringing out a fine save.

Possession dominated, Phoenix still looked dangerous on the break. As ever their break-outs were well dealt with by the no-nonsense tackling of Parker. His style of no nonsense defending and his ability to play the ball from the back is making him a fans favourite – that’s for sure!

Back down the other end and Ruben sets Charlie free with just the goalkeeper to beat – but just as he was about to pick his spot, a last ditch sliding tackle came in from the very impressive Phoenix number 7 to snatch the ball clear for a corner. Between Phoenix goalkeeper and their number 7 – they were keeping Colron Yellows at bay.

Charlie showed quick feet to round the goalkeeper – but yet another last ditch tackle denied him and Colron Yellows.

Another break from Phoenix produced a fine stop from Joe in the Colron goal, who showed his usual bravery in dealing with several attacks. Against the run of play, the Phoenix number 7 picked up the ball in his own defensive box and ran the length of the pitch, taking on several Colron players and slotting neatly past an on rushing Joe. Ian reacted by making some changes, which saw Charlie come off for Zak and Parker come off for Mason. Quickly to follow was Zaine off and Millie on. Zak and Zaine worked well together on the right hand side and another save from the Phoenix keeper.

A special mention for Joe here though as he produced a fine double save in the Colron goal to keep the deficit down to only one. Millie too is a pleasure to watch with her enthusiasm, determination and attitude to the game. Some really good and important tackling from her disrupted Phoenix on a number of occasions. The half time whistle sounded.

Second half. Let’s go Colron Yellows! The second half underway and the gaffer’s team talk still ringing in their ears, showed a new urgency for the Yellows. Fine play and a great interchange saw Zaine through on goal. Would the pattern change? Would the keeper deny us again? Absolutely no chance, as Zaine picked his spot and showed the ball his laces. Game on!

The second half carried on as the first half had left off – Colron’s tails were up. Great play that was born on the training ground at Walmley Cricket & Sports Club was carried onto the pitch and Colron struck again through the not-to-be denied Ruben. The physical and athletic Phoenix quickly responded and the new goalkeeper Mason could do nothing as their equaliser found the roof of the net. It’s end to end now and there are chances galore. A goal line scramble in the Phoenix box sees the parents demanding someone sticks a toe on it to put it over the line. Charlie close, but it is gobbled up by the keeper. Great play by Colron’s Joe, Ruben and Charlie unlock the Phoenix defence again but yet again, some tough tackling denies us.

Another attack soon after sees a determined Zak seize upon a parried shot from the Phoenix goalkeeper. He squeezes a pass through to Charlie who tucks it home. Get in there! Can we hold on? Millie looking to start a high defensive line was involved in keeping Phoenix penned into their half, but it was clear to see that our energy levels were low and there was little tracking back and defending happening – despite Ian pleading for them to get goal side and defend in numbers. It was now all Phoenix. Good save from Mason, some good last ditch defending from Ruben, and Parker with Millie doing some great work higher up the pitch but Phoenix were looking dangerous and grabbed a deserved equaliser.

Now it went from a game of trying to hold on for the win to trying to hold on to a draw as Phoenix were more threatening. Joe was giving everything, Zaine continued to show some great footwork and was having a very impressive game. Charlie went clean through on goal, one on one with the goalkeeper – but could not generate the power to find the net and the keeper gathered easily. We were tired.

A minute before the final whistle, Phoenix broke away and from a very tight angle, their striker shot and it went in off the inside of the post. A Phoenix win, With no time to reply, their managers were screaming for the final whistle, to which the referee responded.

Despite the natural disappointment, this team will learn from games like today. On another day and if we had taken our early chances – we would have been out of sight at half time. But it wasn’t to be and credit to the physical Phoenix team for holding on and turning things around.

A special mention to Henry – who has been poorly this weekend. We missed you mate and the entire team hope that you feel better and are back scoring goals for us soon! And of course, we were without Tommy too – but apparently, there was something more important that he has to attend to today? Onto the next game!