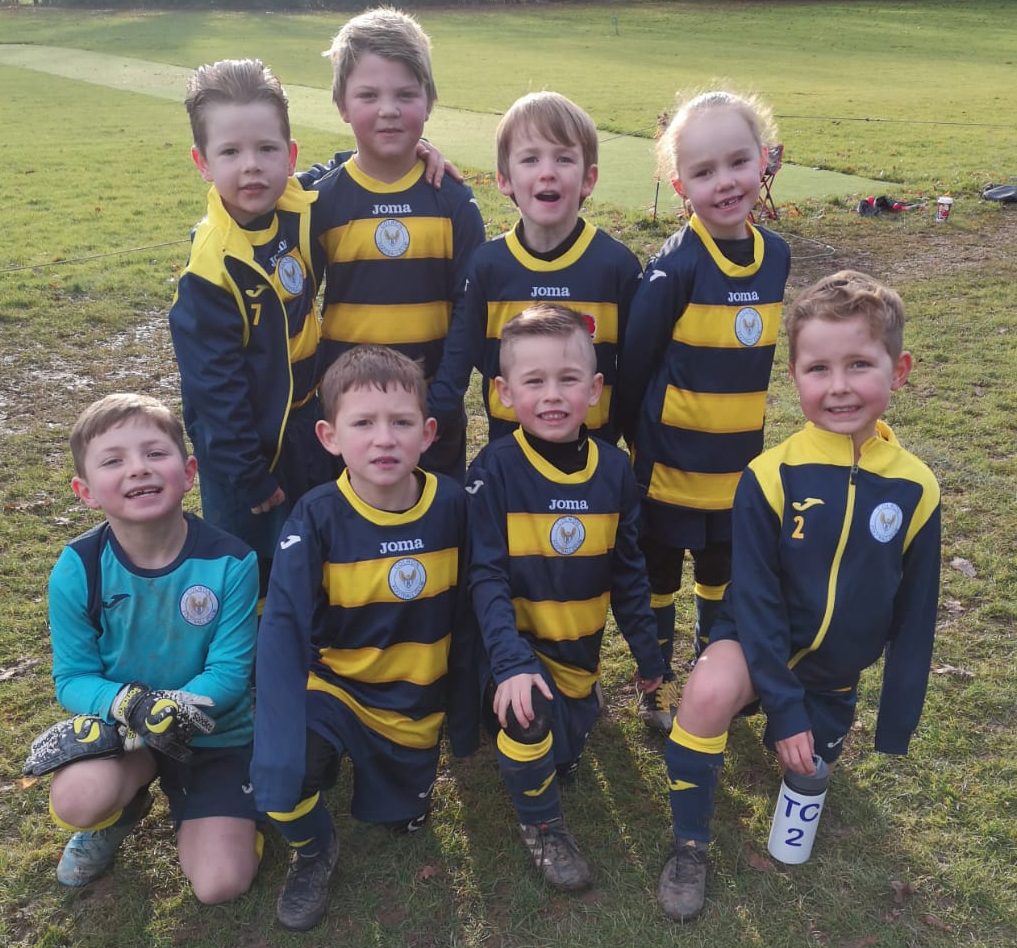 Colron Yellows took to the field at the slightly later time of 11.45 this week and found themselves up against a very strong side in Halfway Junior Lions on a very wet and muddy pitch. A cold wind blew as the game began and the explosive start that the Yellows’ fans are used to did not materialize.

The game started scrappy – but it was clear to see that Halfway Junior Lions were a very strong opposition and they were passing the ball around well.

A few sloppy passes by the Yellows saw the Halfway striker find the ball to unleash a shot which left Zak clutching at thin air despite a valiant attempt to save it. Goal for Halfway.

The Yellows were out of sorts but Parker was trying everything he could to stem the flow of attacking threat with some tough tackling and some long balls to try to find the ever-busy Henry up front.

A spark of life saw Reuben intercept a pass and move through the gears to go on a mazy run, in turn finding Henry who fired a shot that was well saved by the keeper.

In an instant, Halfway were attacking the Yellows’ goal in numbers and the ball fell to their centre midfielder, who buried his shot into the roof of the net for another goal to Halfway.

We needed a response.

Out came the ball to Henry, who faced up their defender on the halfway line. A touch to the side and a swerve of his body fooled the defender and Henry burst through using his pace to unleash a shot, which was very well saved by the goalkeeper. A great piece of skill and maybe a glimmer of hope as we tried to get a hold on the game.

It wasn’t to be, and despite some neat passing in midfield, Halfway broke through again. This time, a mix-up by Zak in goal saw the ball fall to their centre forward who made no mistake to slot the ball in for another Halfway goal.

Again they threatened and a good shot was well saved by Zak in goal.

We were containing Halfway now, but there was a lack of tackling across the team. Parker was trying to cover the back line with the support of Reuben, and it seemed that this game was going to be a case of damage limitation for the Yellows. Everybody on the sidelines feared the worst and we all just hoped that the Yellows’ heads did not drop too much.

The Yellows won a succession of corners, which Charlie was to take. He fired it in and their keeper did not deal with it too well and the ball fell over the line and into the net. A goal for Colron Yellows! Something to cheer in a very tough game.

The joy was short lived though as Halfway came forward immediately from the kick off to keep their advantage to three goals as they left Zak with no chance.

We’d scored though, so at least we had something to take from the game! Nobody knew how the rest of the game would play out, but we could see the Yellows continuing to try for each other and Reuben and Henry went through on the counter attack – 2 against 1. Reuben tried to feed it through to Henry but it was well intercepted by the defender.

The Yellows were starting to win the midfield battle with Parker and Charlie battling hard to gain the advantage.

Parker was brought down in the area and the referee pointed to the spot. The gaffer maintained his policy of letting the player that won the penalty choose if he wanted it, and Parker – not short of confidence, stepped up. A player that has not scored this season, with a very important penalty kick to give the Yellows hope. There need not have been any nerves whatsoever, as Parker stepped up and slammed it into the roof of the net. A first goal of many – we all hope! Now we were only two behind! The Yellows were looking better and we were confident again.

The gaffer rang the changes and on came Tommy and quickly after Mason. Straight into the game both of them with some great tackling and passing from both.

On came Millie, who was also looking to make her mark with some tough tackling.

A poor goal kick from Halfway fell straight to Charlie who shot from just inside the opposition half which just fell wide of the post. And another identical effort just sailed past the post.

The chances were coming! Half Time two goals behind.

Into the second half now and Zak was out of goal – replaced by Henry. Zak went up front and it was clear to see that the gaffer had given strict instructions at half time. GET MORE TACKLES IN! Zak harried their defence, throwing his body in to try to force mistakes. And there was a new spirit about the team. The Yellows were battling again.

Mason, was playing excellently in defence and Reuben was showing some classy defending and carrying the ball out from the back.

Slightly against the run of play, Halfway broke and gave Henry no chance in goal. Three goal difference yet again for the Yellows, despite having the better of the play now.

Tommy went through on goal, only to see his shot go wide.

Some neat play between Reuben and Charlie saw Charlie brought down in ‘Charlie free-kick territory’. He stood over the ball, ran up and struck it with pace into the back of the net. What a great goal! Two goals difference and we were playing well.

The hard battling Tommy was exhausted due to his efforts and he made way for fresh legs. On came Millie and Mason and off went the hard working Zak. It has to be said, that both Millie and Mason were nothing short of excellent today.

Some really great tackles, both throwing their bodies on the line – brilliant to watch! Back to the game and the Halfway defence made the mistake (again) of committing a foul in Charlie Free Kick territory. We all know the result of that – as Charlie stepped up again and buried it into the bottom corner this time.

Wouldn’t it be great if we could scrape a draw from this game? One goal the difference.

The Yellows were on top – but Halfway still provided a threat – and Henry needed to be alert with some great reactionary saves in goal. He kept the ball out and the deficit at one goal.

Parker still with huge confidence from his goal was displaying his usual cool and calm performance.

A great passage of play from Reuben as he jinked around two players to feed the ball through to Charlie – but it was just too far for him to get under control.

Millie, yet again harried the forwards into making a mistake and the ball found Charlie just inside the opposition half. He shot… Goal! The ball squirmed under the goalkeeper – and the Yellows had done it! Or had they? We were level – but there was still 5 minutes to go.

Kick off again (for the 12th time). Parents were certainly overjoyed and willing to settle for the draw. But the players weren’t! More brilliant last ditch tackling from Mason, Millie and Reuben.

But there was something left in the tank. Reuben and Charlie combined well, and Charlie struck a sweet shot that went through the air in slow motion.

We’ve only done it! The ball rolled over the line and softly kissed the back of the net.

Leading for the first time in the game and defending the last two minutes well, the referee’s whistle went and with it, a victory for Colron Yellows by one goal in an 11 goal thriller. What a fantastic way to sign off the Decade! Parents and children were all thrilled and Christmas really has come early for the Yellows.

Absolutely brilliant for everyone involved and the second half was amongst the best performances of the season.

A special mention must go to Zaine and Joe today, who were unable to make it.

You were both really missed and we are all sure that with you, we would have been even more impressive and much stronger.

Please hurry back both of you! Well done to the Gaffer also – all of the hard work and commitment on the training pitch is showing through – all of the technical learning is one thing – but the never say die attitude, is something else and with that, they will go far.

Each and every member of the team were great today, but the decision of player of the match was a no brainer.

Nothing short of a brilliant captain’s performance and a player who dragged us back into contention with 5 (yes 5!) super goals.

So, that’s it for the decade! (sorry about the long report) but I am sure that you will all agree that today’s performance was worth it! Super Colron Yellows!

Editor: The next match will be on Sunday 5th January 2020.