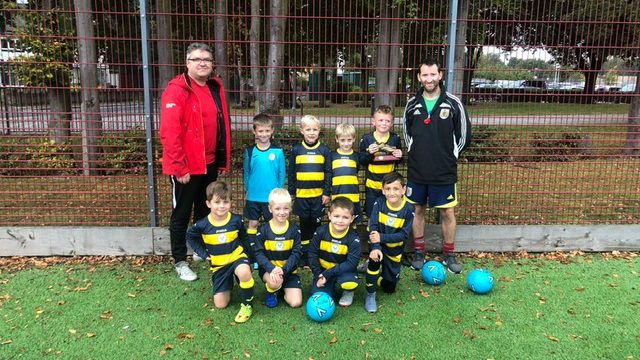 See the report for match 1 here.

After a team talk the players arrived on the pitch lead by their captain Kyrie with smiles on their faces. Conner in goal, and Zac, Jake and Jacob on the pitch. Kyrie took the first touch of the half to start yet another high-pressure match. This game, though, Colron started to mark their players more and intercepted the ball more however struggled to get it out their own half.

Kyrie took a powerful free kick to Zac who headed to goal but no glory today.

Jake then cleared ball after ball to support Conner in goal who also made great clearances and heroic saves.

Kyrie played a key role in intercepting the balls from Rangers’ skilful players.

A corner was awarded to Rangers which connected to a handball and a penalty was awarded and a goal conceded.

This did not dampen Colron’s mood and Zac finally used those running legs well to get into Rangers’ half and with some persistence got a very well-deserved goal.

Due to the pressure applied by Rangers Colron were hesitant to push forward as they were concerned about defence.(Zac A’s mum’s word)

Half Time hit and we see Conner now in goal and Jake off Ollie on.

The second half was another half of defence with Kyrie intercepting a fantastic ball to clear the ball away from goal. Ollie stayed strong in defence and tackled the players well.

Unfortunately, another 2 goals were conceded however more could have been conceded if it wasn’t for Conner’s dynamic saves. Jacob played well and took some great throw ins to aid his team in their battles. He also made some clearances too.

Zac ran up and down, up and down the pitch for most of the second half, it was like he was on an imaginary bungee cord.

Ollie continued to blast the ball clear of goal and Zac took a brave ball to miss just at the end. Zac then decided to have a little word with the ref about a goal kick that he believed was a corner. Zac didn’t win this conversation.

In the last few moments of the game Conner continued to be consistent in goal.

A final goal for the Rangers at the end of the game led to Colron Blues second loss of the day.

Good Effort boys but sometimes it is not your day and in the words of Vanessa (Kyrie’s mum) “The Weather reflected the mood.”

Player of the match awarded by Jake’s mum to Zac R for his effort when he was upfront on his own. Well done Zac very proud of your efforts today!