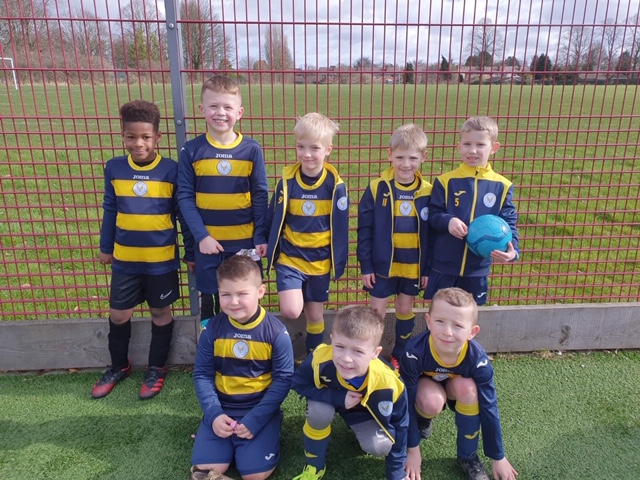 The sun is shining, and the wind is present, and the temperature has just made double figures. The boys start off well with good passes and runs between Harry and Zac before Cohen gets involved with strong tackles and presence that puts the Titans on guard of Cohen.

Cohen battles through and makes valiant tackles that forces the ball out for a corner. Titans response quickly and with a smooth ball into the area and a clear strike the ball is in the goal and it’s 1 down. The boys are not fazed and get straight back to the game in hand and Cohen continues with his strong tackling ability. Cohen tackles the ball and passes the ball down the wing for Zac and with an open space Zac shots, which is saved by the keeper by a block the ball is still in play and Harry is there ready for his first goal for Colron. Well done Harry.

The Titans are now more determined to get the ball back and with a good battle from Harry with a dependable Tyler ready to support, the ball is forced out wide to stop the pressure which was rising.

It’s not long before the pressure is back and it’s a second for the Titans.

Harry is back in the game and makes good runs chasing the ball up the field to apply ample force to the Titans. Zac makes a smooth tackle, but the ball goes wide.

Cohen after a few minutes of not being able to get through makes a huge run along the wing to force the player to admit defeat and it’s our ball. Cohen takes the throw in however it’s intercepted but not for long as Tyler makes a good defence move.

Titans dominate the ball for a few minutes but Colron are doing anything possible to not allow them through easily. Fisayo then makes some dynamic saves one after another to ensure that the score is never going up.

Fisayo makes powerful goal kicks to allow Zac a good run at goal however some pressure from the Titans and possibly a questionable tackle but Zac ends up on the floor.

The ball is like on a bungee cord this morning and is already back in Fisayo’s hands for another goal kick. Fisayo’s goal kick meets with Harry’s feet and a strong run sees Harry’s nimble legs take a jump over a player during a dicey tackle in the middle of his play, for the ball to then be intercepted and the pressure is back on.

Finally, it’s another goal kick after a great save from Fisayo which forces the ball out. His long kick this time deflects off a Titan and it’s a corner. The ball doesn’t go too far and it’s pressure again. Tyler reciprocates the pressure and forces the Titans play out.
The corner is in and it’s to Zac who looks for the run but is taken down and a free kick awarded. Fisayo takes the free kick to Zac who turns and passes to Harry, but his efforts are saved, Unlucky boys as it was fluent passing.

Just before the half time whistle is blown the ball is back up the field but another dynamic save from Fisayo. Great job in goal.

The final move of the half goes to Zac with a pass from Fisayo and the long shot is on target but saved.

The second half begins with Fisayo in goal, Tommy on left, Jacob centre, Cohen on the right and Jake protecting his team in defence.

The game starts and Jake starts his role with a strong clearance down the pitch. The ball is received by a Titan, but Cohen isn’t having this and races down the field to make sure he forces the play out. The Titan player is not happy about this.

Fisayo continues his robust performance in goal to make a clearance. Jacob is on hand to receive the ball and with a turn makes his run to goal, unfortunately a trip sees the ball saved.

Cohen now intercepts the ball from the goal kick and makes a good run for the ball to be knocked out of play by the opposition.

Cohen takes a good throw in but Titan have been epic at intercepting throw ins all game. The ball is back in play and heading towards Fisayo but no need to worry he is as cool as anything making the save.

Fisayo’s goal kick creates a little battle in the box and Jacob suffers a blow to the hand from the ball. He is off for Zac whilst he gets his hand looked at. The game plays on and Jake makes another spectacular clearance of the morning. Tommy holds his ground too and makes a good block from a powerful ball.

The game is a little bunched up now, but Cohen forces a throw in to dissolve the crowd of players. Tommy takes the throw in and connects to Cohen who can’t catch a break today for any runs that are more than 3 steps. The ball is passed to Zac who takes on a run but is forced out of play.

Cohen is off and Jacob back on.

Tommy takes a good throw in but Zac misses his opportunity and it’s wide.
The ball is back in Titans’ play but not for long as Jake is not letting anyone past today. It’s a ball for Fisayo and a long kick to Zac who turns and plays to Jacob. Jacob continues to be involved in the game a makes a good move forces a ball out wide.

The last minutes of the games are approaching and Jake makes a warrior tackle which sees the Titans awarded a free kick, but with no joy for the Titans with the Kick. The whistle is blown, and the game is over.