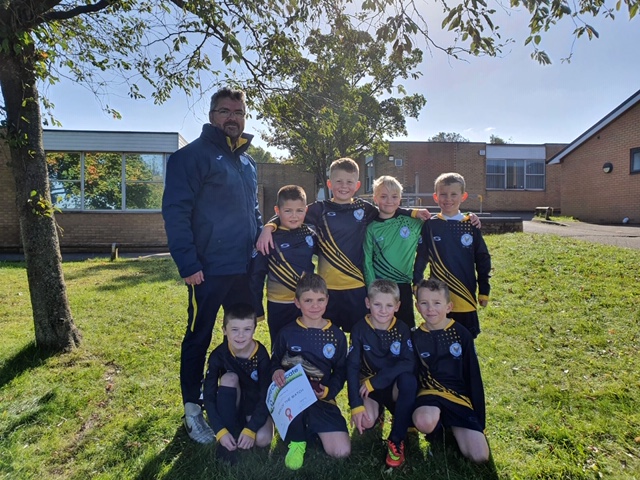 The game starts fast before I even get my book open with the line-up of Jacob in goal, Zac returns to defence, Jake, Harry, and Tommy.

The game continues just as quick with a few fast plays before Zac stops the ball in defence, makes a pass to Harry, who takes a short run and a clean pass to Jake and a huge strike but just wide.

The game follows back down the field and it’s a goal kick for Jacob, a short ball to Zac, who takes a pass to Tommy, who has made space towards the goal but is blocked by a lions defence and out for a corner.

Harry regains possession and with some effortless turn’s gains control of the game to Colron. Much pressure is applied by the Lions and some great teamwork is observed.

Zac takes a touch and controls the ball, making a tidy play to Harry and with control and a few steps forward takes a shot, which just went wide. Real shame as it was great play.

Now for an extremely fast piece of play, a quick corner sees Harry in the box to score a goal and a header from Jake to make extra sure that the goal was in.

The pressure is mounting, and Tommy is like an energiser bunny making specular runs across the whole pitch to gain back vital possession.

Lions have a corner which sees Zac make a clearance on the line, the play continues in the box with one incredibly determined Tommy to get the ball out. After what seemed like a never-ending battle Tommy gets the ball out.

A throw in from the lions allows us to regain the ball. Jake takes an almighty kick, but it was just wide.
Harry makes a good run and play to Jake down the wing and a wise pass to Tommy sees Tommy goal saved.

Colron continue to battle hard and take on good fights for the ball. Jacob makes some saves from some short balls.
Jacob then plays a short ball to Zac, Zac takes a long kick to Tommy down the wing, Tommy makes a shot at goal and it’s deflected, Tommy continues to battle, the parents think that the ball is in but it was out for a corner (so the Ref says).

Jacob, Zac and Tommy continue the same play but its wide.

Tommy gets tackled hard before half time, but the play continues in our favour with Harry but no luck and in the words of the Ref time for a break.

Second Half starts Jacob, Cohen, Tyler, Zac and Owen. The game starts with a rehearsed plan of Cohen back pass to Zac, a long ball into the box for Tyler, unfortunately a little too long.

Lions come out this half fighting and are more eager for the ball and possession. Zac stands strong in defence and fights to not concede the corner in his battle he loses a boot but continues until the ball is out of play.

Owen on the field sees him chasing the ball down, when he gets it a pack of lions surround him and he has no chance of a clean pass.

Tyler makes a throw in which regains our momentum, Cohen is there to break down the field with quick feet, but unlucky, Owen is surrounded in no time.

Jacob, to Zac long kick to Cohen, however cannot connect with his team mates so wisely forces it out for a throw in.
The lions take a chance from a long ball and its in the net like a rocket, Jacob would have had no chance.

A corner ball in sees a lot of players from both teams in the box and the ball appears cleanly at Cohen’s feet for a quick tap in. (The goal was assisted by Owen, who distracted the goalkeeper on the first attempt).

Zac has some space himself now and attempts a long kick at goal, however the goalkeeper is on the ball and no luck today Zac.

The pressure is mounting again from the Lions and Colron unite in defence to reduce the pressure, with a spectacular clearance from Cohen. Jacob continues to hold his nerves and stand strong in goal.

Then it’s back to Colron to shine and prove how much we have grown as a team. A good set play down the field sees Tyler in the box and boom another goal for Colron.

The game restarts and Owen is there to gain possession and makes a long run up field, However The Lions are all about defence now. Cohen also sees an opportunity to run and with all his might tries to make a pass but with a ring of Lions around you, it is not going to go in your favour.

Zac continues in defence and makes some solid clearances and Jacob makes an epic save.

Colron concede a free kick and it’s a top bins goal. All the walls in the world could not stop that.