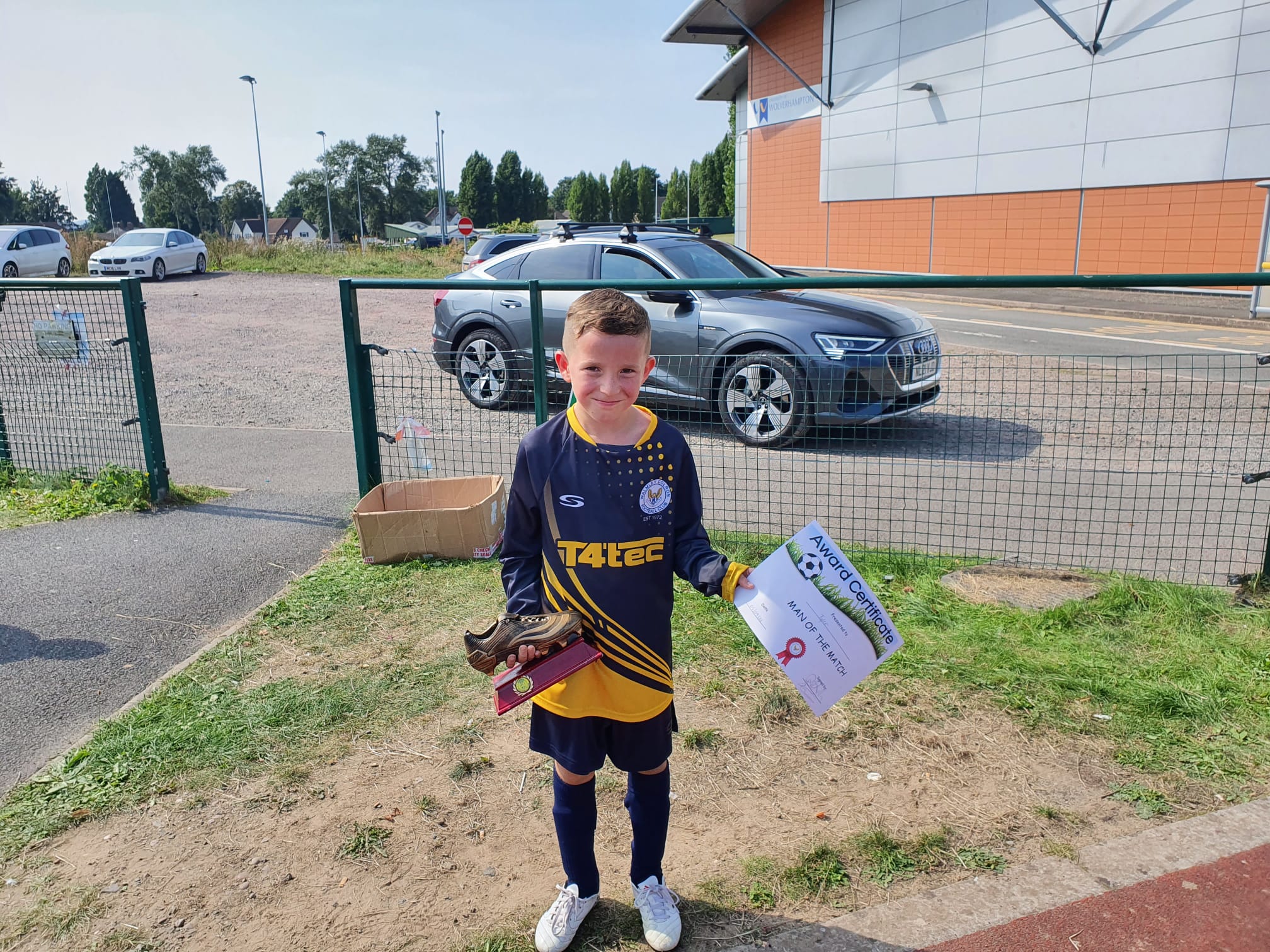 The second game sees Bustleholme Tigers buzzing from their 7-0 win just and also from our 9-0 defeat by them last season.

This game doesn’t start like the previous and a battle has started, with Jacob making a save from the offset. Walmley Colron are not fazed by this pressure but stay calm and collected and know what they need to do. Zac plays many a long ball throughout the game to connect superbly to his team mates to add the pressure needed to unnerve the tigers.

Tommy also upped his play to another level using his strong tackling capacity and his speed to stop the Tigers in their normal fast play.

Walmley Colron played the game fast, making fast moves and lightning quick throw ins to try to gain an advantage. A very quick corner from Cohen saw a controlled move from Zac saved. Zac retreated quick to support his teammate, but Owen had defence covered well and a tackle from Owen saw a play to Zac, a long ball to Ewan and a great run to Cohen and its wide.

Yet another free kick for Zac and another hit for the cross bar (Today isn’t his day).

Another beautiful piece of play saw Ewan to Co to Ewan back to Co and it is deflected and wide.
Continuing with great play Owen tackled strong, crossed to Ewan, Owen moves down the pitch, receives the ball and it’s saved.

Tyler is taken down, but no penalty given, back to our possession but it’s intercepted and a defensive battle is on with Owen and Tommy having to work hard to stop the play.

Half Time is here and the boys have done amazing.

The second half sees many long balls from Zac to reduce the pressure of the game, the Tigers continue to apply pressure and the intensity is building greatly.
Zac, Tommy and Ewan make some plays, but nothing is getting in the box.
Zac makes a great header save in the box. The pressure is huge. The captain removes some pressure as he takes on many of the Tigers on his way up field but it’s a miss.

Zac and Cohen work as a team to work along the right side but always seem to get stopped at the end.
Owen makes some great tackles and some decent little moves forward to unnerve the tigers. The tigers are aware of Tyler and box him in a lot this half and as much as he battles and battles he can’t get there but he does force pressure on the Tigers who make a mistake and it’s an own goal.

Tommy battles hard to win back the ball and a pass to Ewan sees the ball wide.

Zac to Co to Tyler sees the ball over. The remainder on the half sees a strong defence and a super determined Cohen trying so so hard to get the ball. But the whistle goes, and it is a win. What a match. Phenomenal effort.

I would just like to say what a strong effort the team all put in today – larger pitch, longer times, 2 matches, warm and no subs. Heroic.

Man of the Match goes to TYLER, what a huge performance today. You got a hattrick in your first game (Last season scored only 3 all season). You battled hard and played well even after your injury.