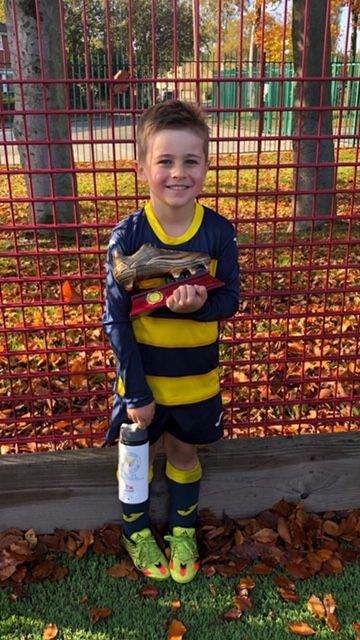 Our Second game of the day (Match 1 report here) has a very autumnal feel not sure if we are playing on leaves or Astro turf in this game, but the players don’t mind and off we go against Lane’s Head Devils which I presume are nicked “The Giants” and possibly should have all their birth certificates all rechecked.

The team starts Jake in goal, Ollie, Tyler, Kyrie and Fisayo as Captain. The game starts with an Ollie clearance as Lane Head make their move on Colron.

Tyler then makes his first run of many this half and off he goes from a ceased ball from Lanes Head, a pass to Fisayo before Tyler got into a better position to continue his attack towards goal. He runs through the defence like they don’t exist. The ball is cleared out slightly before Tyler tackles once again to gain possession and a turn back to goal and he is off and this time a goal. Well done Tyler your first one of the season and very well deserved, what a great player you are.

Kyrie’s turn now to showcase his skills on the field, great control to receive the ball and turns to make his mark on the game. He goes on many control runs to get the ball intercepted at the end. Kyrie battled and battled for the ball taking on good clean tackles to ensure Colron remained in full possession all the time.

Kyrie got a ball up the field to Tyler who side footed it to Fisayo who slipped it into the net, 2 goals up.

Ollie made a clear as Lane Head started the match again.

It wasn’t long before the ball was back in Colron’s ownership, Fisayo takes the ball up field and with Tyler reading the play well, waits in space, the ball is at his feet, turn and it’s a goal!

The team aren’t complacent of the lead and work well as a whole squad to apply pressure.

Kyrie continues with his runs and links with Fisayo to continue the play. No more goals just yet though but the skills the players are showing us today are making us super proud.

Ollie makes an effective clear from a strong tackle to ensure Jake hasn’t got to do anything this half. Jake, who is a little bored in goal, comes out to make a good clear to Kyrie who takes on another run.

What a half so far, the boys daily step count must be at 10000 already they have played across the whole field to ensure this game was theirs.

Ollie takes a throw in and Tyler continues to run at a quick pace up the field. The ball is cleared out by Lanes Head for a goal kick for Jake.
Jake passes to Ollie who makes a run up to find Fisayo but no end results this time.

Tyler carries on yet another dynamic run from his own half, but the team have his card marked now and he isn’t getting through at the end. Back to Kyrie another run at the goal, it’s just not going in for you today.

What a team you are all this half, a force to be reckoned with. Kyrie takes on his final battle before the whistle is blown.

Half time and we are in the lead.

The second half brings on the team of Jake in goal, Zac R, Zak A, Cohen and Fisayo as Captain.

Fisayo starts the game strong with a quick run and a shot but a miss.

Zak A takes a run down the whole pitch at a supersonic speed, but a miss is on the cards this time. It’s a goal kick. Fisayo has his eye on the ball and once the ball has left the goalkeeper’s hands, he is there hungry for another goal and next thing you know it’s in the back of the net and Fisayo is off to celebrate.

Zak A sees another goal for his team and wants some of that action and he is not giving up. He has a strong battle in the area for the ball to be forced out wide.

Zac R comes into the game down the side and passes into the goal, no one to receive it in time this time.

Cohen continues with his hearty tackles to keep the possession for his team. Zac R takes on a run and a shot wide.

The ball is back in play and Colron take charge of the ball. A ball through to Zac R sees a chip in for Zak A to receive and is this it??? Does his powerful shot connect with the net??? No, not just yet. The goalkeeper deflects it. Zak A receives the rebound and a turn and a shot and its in!!! Zak A is ecstatic his first goal of the season. Natalie’s scream down my ear says she is an extremely proud parent too.

Zak A is not going leave it here and within seconds he has the ball back and with a little scramble in goal it’s another for Zak A.

Goal kick from the team turns into a quick corner for Colron Blues. The legendary Fisayo throw in finds Zak A and it’s a HATRICK, well done Zak A, very well deserved.

The final whistle is blown and it’s a win. Colron truly deserved to win the game their teamwork and passing skills were on point.

The Player of the match is awarded to Kyrie for his 100% effort in getting really stuck into the game. Well Done Kyrie, great football and skills.