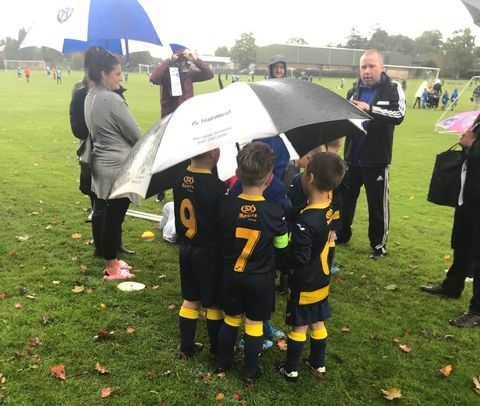 The long awaited debut at Walmley Cricket Club had to be put on hold due to the fishing Lake that had accumulated on the pitch there, luckily the team had the old faithful Streetly Community Centre to fall back on so after a quick pitch inspection the gaffer gave the nod for the match to go ahead.

Any worries of a hangover from the disappointment of last week were quickly pushed to one side (unlike the hangovers of some of the parents) as the blue and yellows showed no mercy with their first serious attack of the match. Inside the first minute a sweeping Colron passing move finished at the feet of Charlie and full of confidence following a superb run of goal scoring he dutifully smashed the ball past the on rushing goalie. Colron didn’t let up and after some good battling, Reuben threaded a majestic ball through to the pacey Zaine whom unleashed a quality finish into the bottom corner. It was then Sutton’s turn to threaten but that attack was soon quashed by the impressive Parker who carried on in that vein for the rest of the match the old quote ‘they shall not pass’ springing to mind. A 2 goal in 2 minutes blast by the free scoring Zaine saw him complete his hat-trick and the blue and yellows were in complete control. Reuben was next on the score sheet after finding the top corner from a free kick after he was fouled on a run towards goal. The gaffer then made wholesale changes and it was time for Mason, Millie, Tommy and Henry to step onto the field. We also saw the introduction of a sixth Sutton player due to an F.A rule aimed at keeping the game competitive. This didn’t affect the energy and commitment on show from Colron, however Sutton won a free kick on the edge of the area which found its way into the back of the net on 11 mins. The rest of the half saw an end to end game with plenty of action. Mason a constant thorn in Sutton’s side mopping up at the back and Tommy and Henry creating a good solid midfield with Millie a constant threat going forward. The extra man for Sutton gave them a boost and they had a spell where we saw the best of Zak ‘The Cat’ who pulled off a string of saves, one of which can be described as world class. As half time approached Henry showed some great footwork to round a defender and send a sweet strike into the back of the net. That was the final action of a pulsating half of football.

The start of the 2nd half saw the gaffer ring the changes again and there was no let up from Colron, Sutton found the only way to stop was to foul but they paid the price for this tactic with Charlie finding the back of the net direct from a free kick. There was a flurry of action in Colron’s half and The Cat was at his old tricks again keeping out a stinger of a free kick, but there was little he could do to keep out a quick fire brace from Sutton. Yet another free kick saw Henry hit the back of the net again, mid way through the second half. This was to be the last goal of the game but it certainly wasn’t the end of the action as the 2 teams went toe to toe. Mille took over in goal and produced a solid and confident performance. There was plenty of tackling, passing and shooting on show as well as some impressive solo runs including a scintillating surge through the midfield by twinkle toes Tommy. There could have been more goals but posts and last ditch tackles got in the way and it was a last ditch tackle that denied Tommy a chance of netting, as the unselfish Henry tried to square the ball to him but a defender flung himself at the ball to get a vital foot in.

As the rain started pouring down it brought an end to a thoroughly entertaining match and certainly the most solid team performance I have seen this season. Every single player stepped up to the mark and played their part in an outstanding performance. A fully deserved, albeit slightly broken player of the match award was given to Parker for a tigerish, solid, determined and skilful performance, well done Parker!