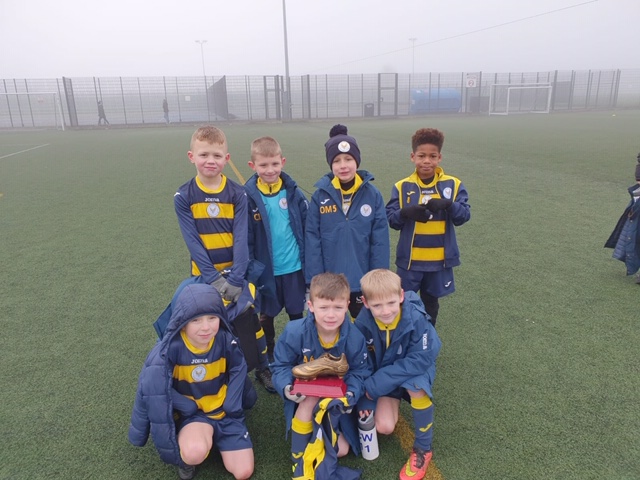 The temperature finally comes out of the minus degrees, so we start Sunday football at 1 degree. The boys are not fazed by the temperature, jumping up and down to keep warm and completing short runs with Andy.

The team selected by Andy to start was Tyler in Goal, Zac, Cohen, Connor and Fisayo.

The game started by Fisayo and with the quick pace of Walsall, Zac had to be on guard straight away to defend. I think Walsall had read my match report from the week before, gave Zac a bride and within seconds another spectacular own goal by Zac. The game kicks off again and it’s straight to defence for Zac again this time giving away a penalty for a hand ball and goal number 2 is in. (We are all hoping it is not a repeat of last week’s game.)

Colron back in their positions and Connor supports his team by kicking the ball out. Zac is back to defend and holds them off for a minute but then goal 3 is in.

Zac starts the game again and passes to Fisayo but it’s forced out.
Colron back on the ball and Zac with great control, as the ball is forced at his feet, makes a smooth ball to Cohen and Cohen effortlessly makes a move to Fisayo. Fisayo controls and takes a shot but it’s a miss, ball is forced out for our corner.

Cohen takes the corner and it hits the net, it’s a goal kick for Walsall. The ball is intercepted by Cohen from a strong tackle and is passed to Zac who has no other option than to kick it out of play which gets a lucky deflection and it’s our throw in.

Cohen takes a throw in and the ball is forced for a corner. Cohen takes the corner and it hits the net.

A goal kick sees the ball back in Walsall’s possession and the pressure is back on. Fisayo gets control on the ball, but Walsall up their game and get the ball forced out for a throw in for Colron.

Fisayo takes a throw in and is faced with a wall of Walsall players but this did not deter him, he reclaimed the ball and with control made a move and boom the goal Fisayo has been waiting for for weeks.

The game starts quick and it’s a fourth for Walsall.

Zac, Fisayo and Connor try to make a move, but Walsall apply to much pressure and it’s a fifth.

Connor makes a pass to Zac to force a clearance before Cohen intercepts the ball to Fisayo and its half time.

The second half sees Zac R, Connor, Tommy, Ollie and Tyler in goal.

The game starts well and Tommy and Zac make a move. The ball is out for a Colron ball and with a pass from Tommy, Zac regains the ball. He makes a move and in Zac’s words, “The goal keeper wasn’t looking so it’s a goal”.

Zac with a sense of happiness (it’s been awhile since his last goal), has found his quick legs to be all over the field. Tommy is taking on the players and gaining the balls down the wing, great effort as Walsall are really working hard.

Walsall outwit us for a sixth goal. Connor puts in some fighting spirit to greatly defend against much of the Walsall team, tackling well to see off some pressure.

Andy makes a substitution of Connor and Zac off and Fisayo and Cohen on.
Fisayo comes on and makes a great impact on the game, tackling hard. Tommy continues to battle through the game with much passion and determination to get the ball back for his team.

Ollie holds his own in defence and as Walsall force themselves towards goal Ollie comes forward to defend well.

Tommy fights hard for the ball and gets it to Ollie and it’s to Fisayo, unfortunately the battle is back and it’s an 8th.

Tyler and Fisayo unite to get the ball back into their possession, they are forced out of play. Tommy takes the throw in and it’s out again. This time as the ball re-enters play Fisayo gets a touch, control and bang it’s a goal and that’s FULL TIME.

Tyler you did well in goal today, many of goals past you today came at some force.

Colron, really started to show their skills again in the second half. A loss but really not a bad game.