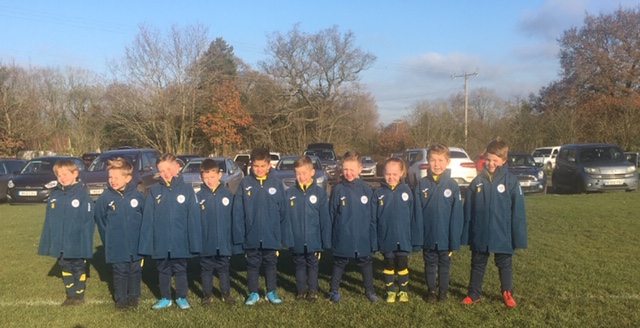 With December upon us and Christmas around the corner, all thoughts of shopping and Santa were put aside as the team, looking good in tracksuits and coats, arrived at Lugtrout Lane hoping to replicate last week’s strong second half performance. With the crowd trying to keep themselves warm the gaffer put the players through their paces with the help of Liam, sporting a lovely new must have accessory on his right arm.

Glades got us underway and as they started to pass the ball between themselves the ball fell at the feet of Henry after some good closing down. Ball at his feet and a quick glance up Henry decided to send a quick fire shot sailing past the defenders and the off guard keeper into the back of the net. Great start from the team. Colron looked up for this today and the crisp passing was lovely to watch.

An interception from the defending Reuben and a pass through the midfield was latched onto by the switched on Zaine but his great strike was smartly saved by the Glades’ keeper. We were ready for a trade mark Charlie free kick to hit the net but his strike settled into the side netting.

It looked like the passing drill from training had sunk in as Colron were pinging the ball around crisply and intelligently and a good passage of play saw Zaine bear down on goal and find the back of the net. Colron were flying just like the planes over our heads but Glades managed to break through and as the striker looked like he was about to score Zak the Cat came flying out of his goal to deny a certain goal, great save.

Some good work from the team set Henry and Zaine up with a give and go and Zaine smashes the ball past the helpless keeper. Great team goal finished off as magically as it was created.

Time for a change and Henry and Zaine were replaced by Tommy and Parker and shortly after that Reuben and Charlie made way for Millie and Joe. After the initial shock Glades were starting to come into the game more and were starting to pose more of a threat. Parker was showing his versatility as the gaffer moved him from attack to defence and he showed his usual tenacious attitude mixed with some nice composed touches on the ball. Tommy looked equally good on the ball, and was showing some super twists and turns in a battle to find a way to goal. Millie was her usual self, a constant threat and an outlet for the defence and as Glades started to apply some pressure. The pressure on Colron was mounting and Zak produced another string of fine saves. Joe looked very steady and defiant as he tackled and blocked and even put his head where it hurts to clear the danger. Eventually the pressure told and as the ball landed at a Glade player’s feet he struck first time and it sailed into the net. The pressure continued and Colron stood firm as Glades had 6 corners in quick succession. The ref blew the whistle and half time was upon us. A good first half showing good passing and creativity and also some strong defending.

Joe replaced Zak in goal and Henry, Reuben and Mason replaced Parker, Joe and Tommy. Colron again started well and Reuben had a few matey runs through the midfield but struggled to find the finish that was needed. All of a sudden slow motion kicked in as the crowd all rose as one. The ball fell to Millie and with great composure she controlled the ball and slotted the ball past the advancing keeper. The ball hit a divot and this sent it rolling agonisingly wide of the goal scraping the post on its way past, so unlucky for Millie.

Colron were applying the pressure and whenever Glades managed to threaten Mason was there to dispossess and then distribute the ball back upfield. Colron were looking comfortable but couldn’t find the next goal and this proved to be costly. A Glades breakaway saw Joe make a good save but there was nothing he could do to stop a thunderous strike after a Colron clearance yet again landed at the feet of an attacker. Glades were looking stronger again now and were pushing forward. Mason was defiant and Henry and Reuben were always looking to get the ball down and run at the opposition. It had become end to end now and Charlie replaces Millie.

Reuben found Charlie with a smart pass only to be thwarted by the out rushing goalkeeper then after few bounces and bobbles in the middle of the pitch the ball broke to a Glades player and with 2 against 1 he found a teammate who put the ball into the roof of the net. What a match this was turning into, a great watch for the neutral.

Henry was replaced by Zaine and as the game ebbed and flowed Reuben picked the ball up in the middle of the park and showed off some great close ball control to beat a few defenders and slide the ball past the keeper. Colron had a scare as the ball went across the face of their goal but they never learned from it and Glades again managed to hit the back of the net.

Zak and Tommy came on and the game flew from end to end. With some better passing decision making Colron would surely have scored again but it wasn’t to be and after a few scares up the other end the game finished and the crowd could relax again.

In the post match team talk the gaffer focussed on the impressive first half display where Colron played and passed extremely well and deserved more goals.

Second half the passing dried up and played less like a team. But all in all a performance to be pleased with in tough, boggy and cold conditions.

Player of the match was chosen by Samas and he picked out Reuben for great defending when playing at the back and showing good skill and vision when playing in midfield. Well played Reuben even with mud on your boots.

All the games now are going to be tough and the team are certainly meeting the challenge head on. On to Sutton Coldfield Town boys next week and will we finally see the team play at Walmley???