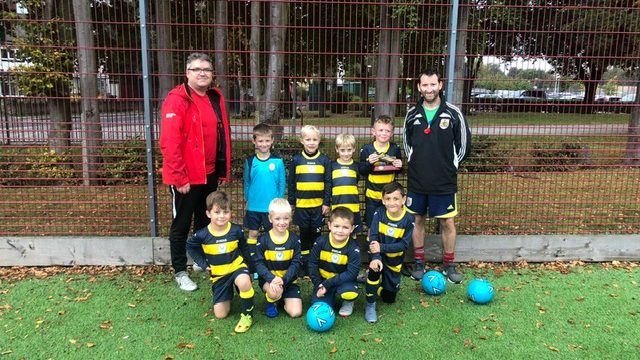 Weekend 3 of the season and the players enter the field looking smart in their new kits. Colron Blues are not a full squad this week missing Fisayo and Tyler. The starting team is Ollie in goal, Zac, Captain Conner, Cohen and enforcer Jake (as named by Richard).

Pelsall Villa had the upper hand from the whistle and their speed and passing ability as a team didn’t bode well for Colron Blues who were 3 goals down very early on!

Colron looked at little defeated at this point but with support from the parents and coaches lifted their heads and set into defend and fight. Jake then took on what he does best and cleared some great balls.

Zac did get a moment to take on 3 players but a shot on goal was saved by their keeper.

The game turned to a game in Pelsall’s End but with pressure now being applied by Colron, Cohen in particular took on challenges to get the ball back.

Ollie made a great save from what should have been a Colron ball from a clear handball.

Colron were awarded an array of free kicks due to tackles from Pelsall Villa. Cohen and Zac tried determinedly to get these free kicks in the goals but were saved by the Pelsall goalkeeper.

Another goal was conceded before half time.

The second half saw Kyrie come on in goal and Jacob on the field. Cohen and Ollie off. The second half was a similar battle to the first. It was a fight after fight to even get a touch of the ball. With Jake defending the goal, Kyrie cleared the ball well from the goal line on many occasions. Conner also made some excellent tackles to clear the ball from more goal opportunities.