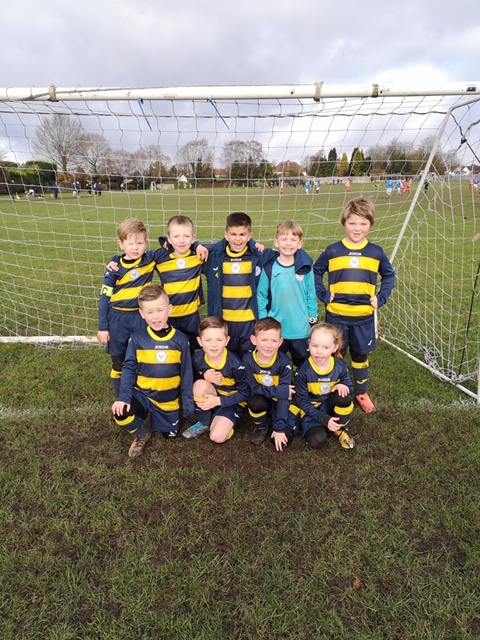 After a morning of swapping and changing to make sure both the U7s and U8s could play it was a slightly delayed kick off, but the game was well worth the wait!

Both teams equalling each other out from the start, end to end with neither team having a clear chance on goal, Zaine and Ruben both with some mazy runs, Henry up top with some half chances… it was going to be a tight game, Joe pulled off a great save midway through the half and Parker doing his usual tough tackling.

But the first goal fell to Rubery with a well taken goal, as normal the team didn’t give up, some fresh legs in Charlie, and the ball soon broke forward and Charlie was there to calmly dispatch the ball in the bottom corner 1-1.

Millie, Mason and Zak were brought into play after some non stop running by the starting 5.

The game still end to end, Millie chasing down everything up front, Mason stopping what came at him at the back and Zak getting stuck into the tackles.

A few changes with Zak in goal, Millie and Mason at the back Charlie / Henry midfield,

The game continued as we left off, end to end and Rubery were first to score, but they only held on for a short time, Henry took a knock and Zaine was on and he soon pulled it back to all square!

Parker now on at the back was soon breaking down whatever Rubery could throw at Colron and a nice pass forward into midfield found its way to zaine who again was on the score sheet, it was Colron’s turn to take the lead!

Would it stay that way? No chance in this game and Rubery were again level following a mix up from a well take corner!

The game wasn’t over there 5 minutes to go, Charlie was brought down and a free kick was awarded, he stepped but only to be stopped by a defender’s hand, penalty, he had a second chance and the team were one in front with a few minutes to play.

But inline with the rest of the game Rubery again pulled it level, and to be honest a draw was a fair result.

A great advert for kids football, a true battle and some good football played by both teams

Man of the match today was Zaine, he covered every blade of grass as well scoring 2 he did his defensive duties and didn’t stop running.

Words from the Gaffer

Great game, every player really doing some great things and progression is great to see.

We really are matching every team we come up against.

Everyone should be proud of their kids!