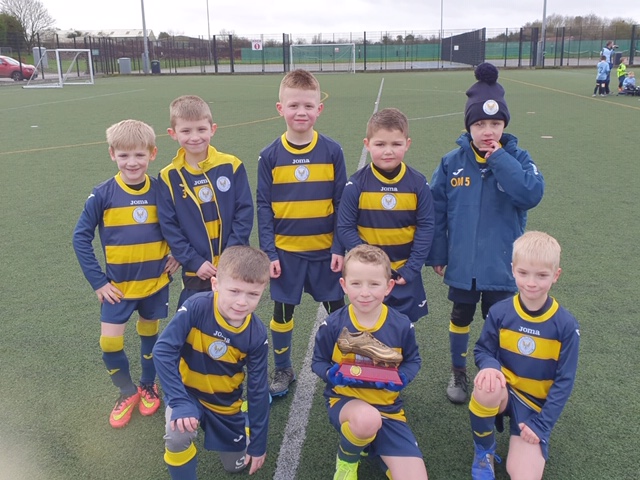 Morning all, on a not so wet Sunday morning! Starting team is Zac in goal, Jake, Tommy, Jacob and Cohen.

Jacob takes the kick off and the game starts with passing from team to team before a determined Tommy makes an intense tackle gaining possession of the ball and at a quick pace he makes his way to goal with great style and control, it’s a save this time Tommy.

The ball is back in play quickly and Jacob makes a good tackle to gain possession. Cohen gets stuck into the game and forces a great block on goal for a corner. The corner is taken and determined Cohen gets really stuck in to gain the ball for a short while.

The pressure continues but Colron hold their own battle and defend well.

Zac makes a save to send the ball back down the other end in true Zac style. The ball is soon back to Zac with a brave save and a quick long ball release to keep the other team on their toes.

Sedgley then sneak a short ball through and it’s a goal.

Jake takes on a flawless pass to Tommy who gets close to goal again and it’s just wide.

Jake continues to take on his strong clearances in defence. Tommy persists with his strong play for the ball and is assisted by Jacob to gain possession to take another ball just out wide.

Thank you, Andy, for your pre match goal keeping tips for Zac, they definitely helped!

The start of the second half sees Zac out of goal and Connor in. Cohen, Ollie and Tyler in play.

The game starts in epic style of a superb play between Zac, Cohen and Tyler, all clear in their visions and positioning on the field.

Cohen made a great tackle to force a corner in our favour. The corner play is made and Zac controls the ball, turns and kicks the ball to Tyler who makes space to fit the ball back through to Zac but what an unlucky miss!

Zac takes a great kick down the wing which takes a deflection for a throw in for Cohen. Zac and Tyler demonstrate some great play, with smooth runs by Zac and Tyler gets into perfect spaces. Tyler gets the ball back to Zac after zig zagging through the players. Zac takes on the last few players and the goal is open, so a power shot is set but it’s a phenomenal save by the goalkeeper.

Zac and Cohen engage in some similar play this time, the ball is lost, and Ollie is eager pushing the ball wide for safe play. The ball is back in play and some pressure is in the box now, Zac tries to get it but slips on his bum. Connor is there to clear the ball for a short while before making a good save.

Connor gets the ball down the field and it’s out for our corner. Cohen is due to take the corner; I see Zac approach Cohen (As the ref is dealing with a injury) I think they were plotting a plan. (I asked Zac on the way home and he confirmed they were plotting play.)

Cohen takes the corner, which is received by Zac, Cohen moves back in play and receives the ball and it’s aimed towards goal but it’s intercepted. The chat nearly paid off, great ideas boys.

The last few moments of the game sees good play between Cohen, Tyler and Zac and a strong defence in Ollie and Connor. Unlucky game Colron you played really well, good pace and passing well with effective challenges.