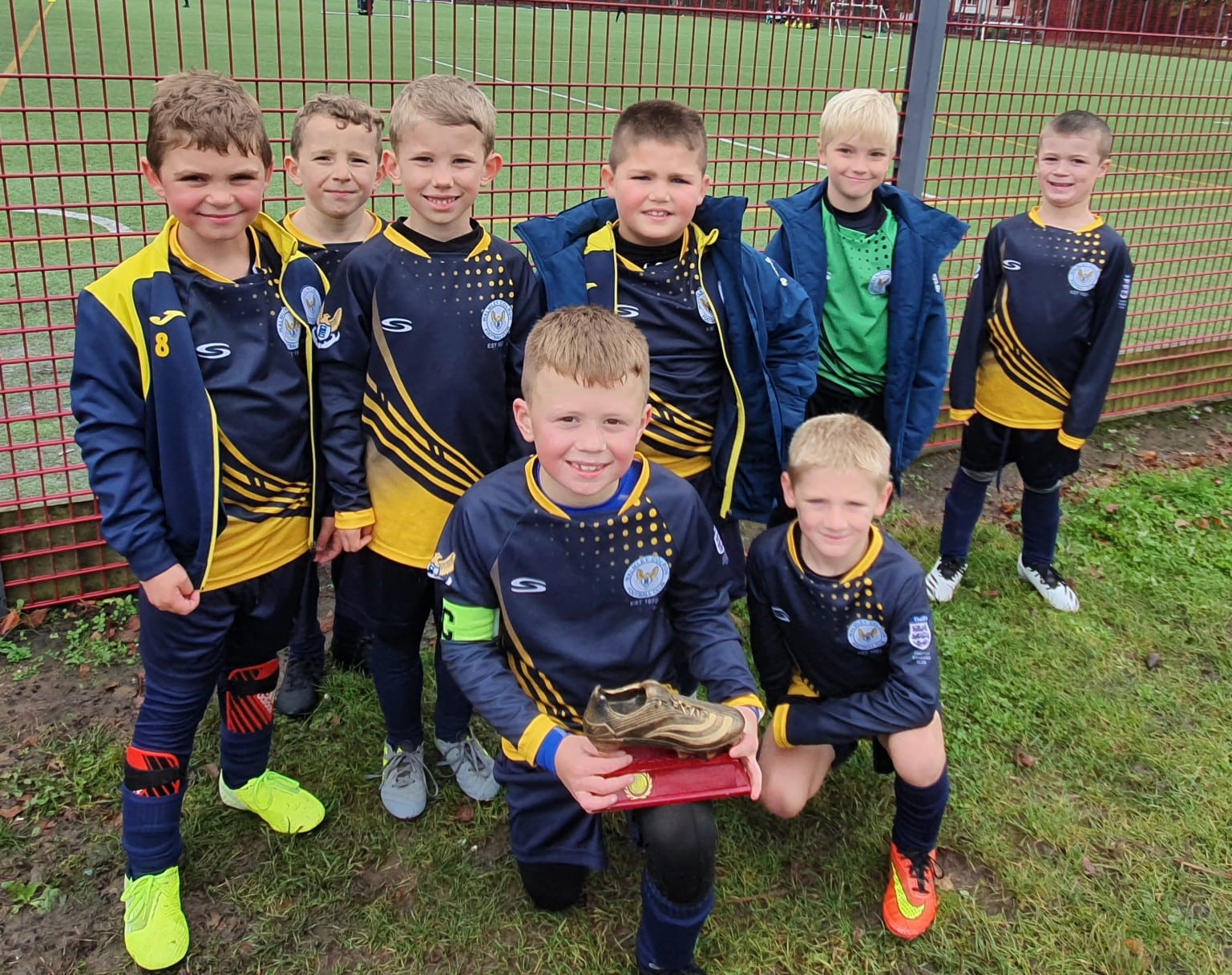 Another Sunday but a different cage to watch through. Back to Grace Academy. On this damp and dreary Sunday morning we see the starting five as Jacob, Zac, Tommy, Jake and Harry. The boys are not fazed by the conditions and start off well with a little back and forth play in the centre of the pitch.

The Pumas then start their attack, but Jake is there to make a clearance. The ball is back in play and back to Jake feet and a run is on his plan, but the ball is a little faster than Jake on this occasion.

Zac holds strong in defence and a formidable tackle sees the ball waiting for an eager Tommy, who takes the touch, controls the ball and makes the play to Harry. The opposition intercept and Jake makes a clean tackle to force the ball out.

It is not long before the play is ours again and it’s a move of Jacob, Zac to Harry and from what I could see it’s a clear from Harry however the ref says it’s a throw in for Colron so we will accept that.

The throw in is quick and a boxed in Jake does not let this faze him at all. Some nibble footwork has Richard shouting “Brilliant play” to Jake. The play continues in our possession for a short while and then the pressure is back on Colron by the Pumas Zac regains control and a long ball to Harry, play to Tommy and it’s saved.
Pressure is back on Colron and Zac clears the ball. Then out of nowhere Pumas get a goal. (To be honest, I missed the lead up, I think it was from a quick short corner that is why I missed it.) Pressure continues to mount, and Jacob makes a save. Jacob and Zac continue with their rehearsed set play, Zac smashes the ball long down the field and it’s controlled by a skilful Harry who receives the ball with an excellent touch, and a twist and turn and boom Harry it is a goal.

Zac continues with a strong stance in defence and plays another ball to Harry, who is forced out, not before the ball takes a small touch off a Puma. Harry takes the corner and it is in the box for Tommy, unlucky Tommy, not going in today.

Jake makes a throw in and Tommy has a good touch, looks up moves forward and strikes and it is saved.
The ball is again intercepted by Colron, Zac takes a quick throw in to Tommy and the ball is wide.

The second half sees Tyler, Harry, Owen, Cohen and Jacob.

Colron come out with some power in their legs and gain possession quickly. Owen takes on a monumental run to goal around many players and when you think that this is it, unfortunately Owen slips (also possibly a pull to the shirt too) and he is down. Unlucky Owen.

Jacob makes a short pass to Cohen and Cohen clears to the halfway line and a sea of Pumas start to attack. Colron retreat but too many players in the box and the ball slips through for the Pumas.

Cohen then makes a great play to Harry, but Harry is blocked.

Owen takes the throw in and connects to Harry; Harry’s move is blocked again.

Cohen is blocked by a field of Pumas but stands resilient and even with his shirt pulled makes the play to Harry who clears the ball as the pressure is mounting on Colron.

There is a change around of positions and Harry moves to defence, Cohen on the wing and Owen central.

Harry is tested straight away in his new position and stands tall for a good clearance. The ball is soon back in Pumas control and now Jacob’s turn to shine with an ambitious save. Excellent Jacob.

Jacob goal kick, to Harry and a lovely piece of passing to Cohen, with all Cohen’s might he runs and runs but he is run out.

Tyler comes into the game on the wing and makes a move down the field to gain Colron possession back. He is forced out and a throw in to Pumas. Tyler continues to mark his player and he forces out another throw in with his head as a clearance this time. Tyler continues to battle hard to make Pumas must run further then needed as he pushes them out wide.

Owen intercepts the ball and a quick chip of the ball, sees a good play to Harry and it’s just out.
Colron continue to battle in the box and instead of the ref giving us the ball for a hand ball we receive a penalty against us for a challenge after the handball offense.

A goal to Pumas, marks the end of the game and an unlucky game for Colron. Colron you played well.