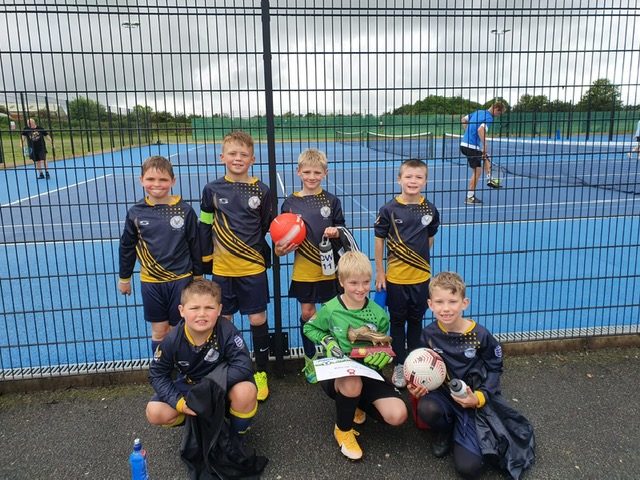 Manager and Coach: Richard and Andy.

Where did the sun go? Back to Cheslyn Hay we go, and the team starts Zac, Jacob, Harry, Owen and Tommy. A rematch with Bustleholme who knocked the boys out the cup 5-1 a few weeks ago.

The game is quick and strong from Bustleholme from the offset and starts with a great block from Harry who stands strong in midfield. Tommy mirrors Harry impressive start with an excellent controlled tackle and a good clean run-down field, connecting to Harry but he is forced out for a corner kick. Zac makes a strong block from a quick midfield play from Bustleholme and Owen makes the clear.

Owen continues with a superb block on goal, unfortunately the second attempt is a goal.

Colron continue to battle hard from a strong team, Zac makes a clear and a deflection rewards Harry with a corner, a short ball in rebounds of a spartan and to Harry feet and a little sidestep from Harry plays the ball to Owen and its wide of goal.

A throw in from Zac, sees a ball to Owen and another kick from Zac connects to a Harry run and its wide for Owen. A similar play from Harry sees a move to Owen who is run out of play. Tommy is quick on his feet when he sees pressure mounting on his team, his defensive play is superb and sets up a Harry/ Owen run which is meet by a formidable Spartan defence.

Zac and Tommy unite, a long ball from Zac sees Tommy connect down the wing but is run out at the last mm.

Tommy never stops and powers through to win a throw in. Tommy is back up field to clear a ball off the line.

Cohen on and Owen off

Zac takes a throw in which is intercepted by Bustleholme, and Harry makes a clear which deflected of a Spartan for a goal kick.

Jacob to Zac, Zac makes a long play down the wing to Cohen who makes a great move forward but blocked in his tracks. Cohen is unfazed and blocked the opposition in a spectacular fashion to be rewarded with a throw in. Cohen continues to apply pressure as he is surrounded by an array of Spartans.

Jacob to Zac to Harry sees a move up field and Colron holding there own against a very robust team.

Tommy stands firm and makes another excellent tackle and Zac makes the clearance to the pressure applied in the box.

Jacob clears the ball well, and Zac and Cohen continue to defend well.

Jacob, Zac and Cohen continue to play a long ball combo down the wing and Cohen is nearly their when he is blocked in his tracks. Zac makes a clearance before regaining possession and having a strike himself.

The fighting sprite continues and a long ball from Zac to Tommy down the wing and a smooth cross into the box sees the ball wide for Harry.

The first half ends with a superb run from Zac but no worthy goal.

The second half sees Harry, Zac, Tommy, Cohen and Jacob. And an early second goal for Bustleholme.

The boys continue as they did in the first half and tackled well, made passes and defended well.

Zac sends a ball down field to find Cohen in open space and a clean pass is made before Cohen sets to work and its saved. Tommy continues as he did in the first half and tracks back well making the right tackling moves.

Harry is under pressure but does not lose his cool and the ball is saved well. Zac defends the play and makes a connection with Tommy who is down the line and with his speed and space awareness makes the connecting ball to Cohen, Tommy sees that Cohen is under pressure and gives him the option to pass back. Cohen does and Tommy shoots, but it is just wide.

It does not take Cohen long to get the ball back and his previous fighting spirit continues and this time it is a goal from a long throw from Zac and an ultimately kick from near the corner flag across goal sees it in the back of the net.

Zac passes in a long ball but no one to connect too.

Owen on Tommy off

Zac makes another long kick this time its just wide of goal.

Harry makes a few cheeky runs and turns to confuse the defence and a move to Owen sees Owen makes some twists and turns also, before connecting to Cohen who is taken down for a foul. Zac takes the free kick, and it hits the side net.

Harry makes a great throw in for Cohen and what an unlucky miss from such a great piece of footwork.

The last few corners to Colron, again causes Colron to miss out on the draw.