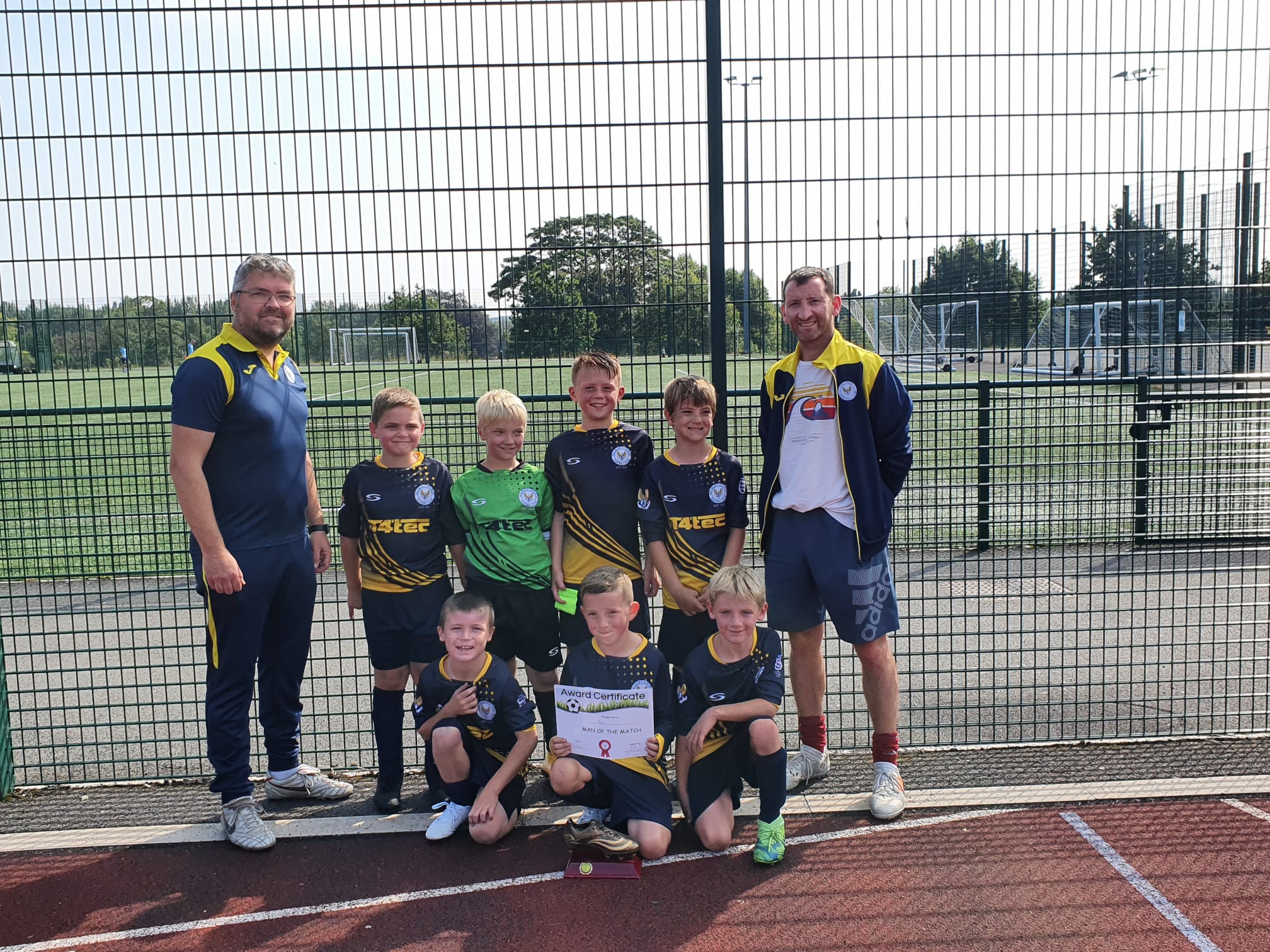 And in a blink of an eye the season starts again! Welcome number 7 Ewan to the team.
A strong and determined Colron side shone from the offset. The boys looked relaxed going into 7 v 7 as if they had played this way all previous season. A change of formation and player position saw Owen settled in defence playing a pivotal role in the team.

The game saw clean and precise movement of the ball throughout the whole game. Tyler who battled and was on the ball from the whistle always moving into space, tackling, and running circles around players his hard work and persistence paid off and 2 goals in the first half awarded to Tyler.

The first goal was from a quick corner from Zac which saw Tyler neatly in the box to drive the ball home. Tyler second goal came from an assist from the new number 7 Ewan. Ewan before Tyler goal had a shot just short after a race up the wing. Ewan slotted well into the team playing along the wing filtering crosses in from the edge of the pitch.

Cohen delivered many a strong corner throughout the first half and was fast to retreat if needed. Cohen played a great game and his whippet speed lead to many a confused opposition players at times. Cohen brings much control and smooth play to the team and is never fazed by the pressure applied by the other team.

Owen’s new position is truly suiting to his play and not only holds defensive play well and did tackle on the occasions the ball entered our half. He also showed a drive and commitment to play which accelerated back down field, a corner from Cohen saw Owen play strong and have an opportunity on goal saved.

Play in the first half saw some great use of the field with Zac, Tommy, Tyler and Ewan set play to get the ball close to goal.

Tommy came into the game in a central role and like always stood strong and battled and past as his team needed him. He didn’t allow balls past the half way line and looked up and made good set plays.

Tyler continues his battle into the end of the first half with every ounce of effort to get his hattrick, a long assist from Zac looked like the hattrick was imminent but it was wide. A Cohen corner saw a cross bar for Tyler, leading to a superb defensive move for Owen who battled hard.

A foul on Tommy saw a free kick for Zac go wide and some flawless corner plays from Cohen sees half time appear.

Tommy started the second half with an injection of fight mode. Tommy was all over the field and a huge run saw the ball kept in play.

Zac produced an epic tackle which saw a great opening, Zac fought through the team and it is wide.

A corner from Cohen delivered a great ball into Owen who stood strong took his time, executed his move to Tyler and unlucky it was saved but the ball is still lose and Co sent it home and a great celebration.

Tommy received another foul and another free kick for Zac and this time it’s the cross bar.

The play continues in Colron’s favour and a chip at goal for Ewan sees it wide and another miss for Tyler. Ewan continues to control the ball well on the wing and another great assist sees Tyler get his hattrick (amazing effort Tyler).

The game draws to an end with a win for Colron but not before Tommy and Cohen deliver outstanding strong tackles and control of the ball, which was complemented by the opposition parents. Great effort boys, each one of you made a difference today. Not to forget Owen goal blocked at the end.

And even though Jacob you only had to make one save on goal, you were focused and ready for the challenges facing you. Well done on the clean sheet!