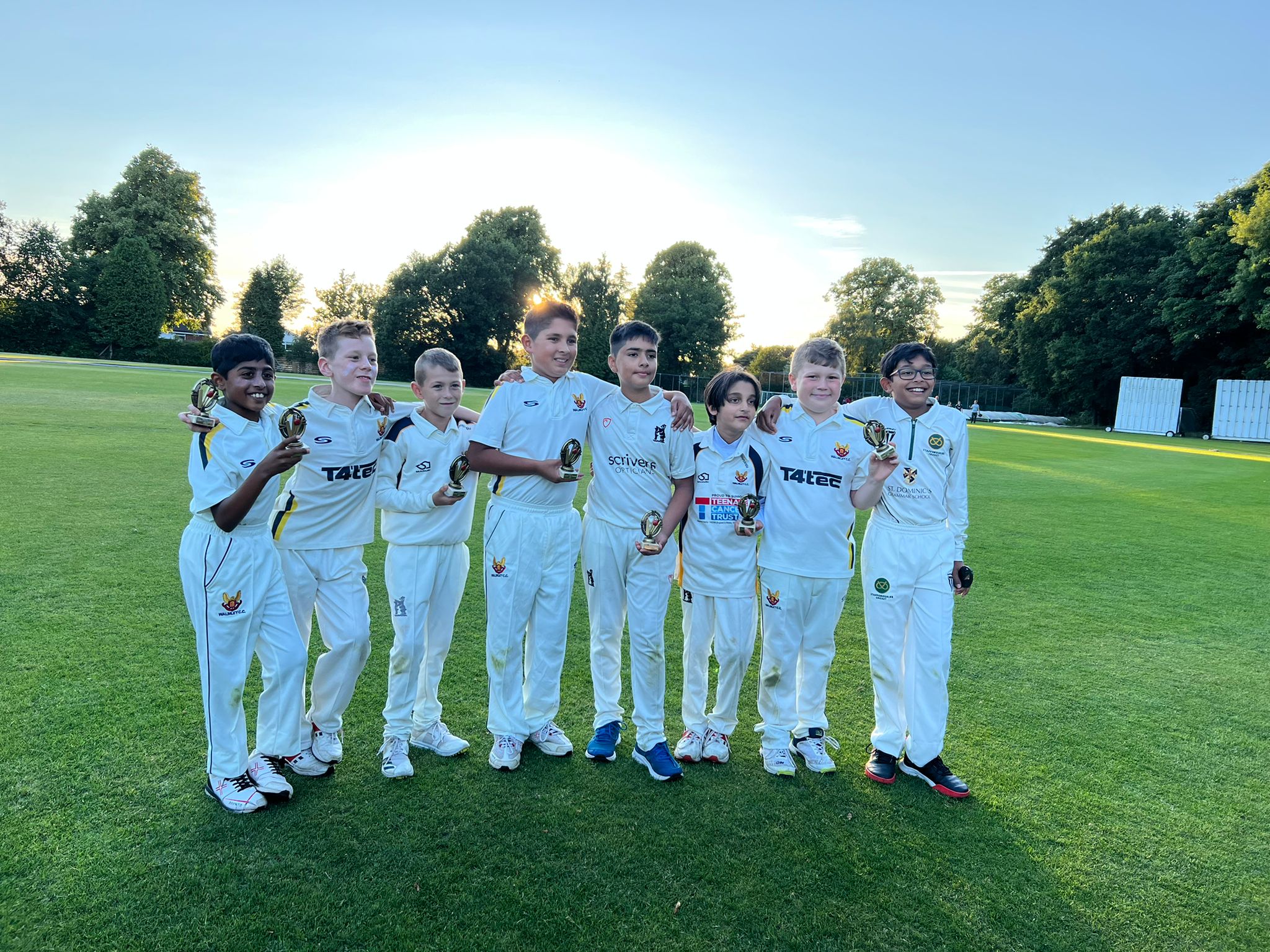 On a sultry evening at Eldon Drive our young Under 11 side won their maiden trophy with aplomb! Walmley were facing a talented Dunstall side who had taken some impressive scalps during their route to the final.

Rewind 3 seasons ago and this inexperienced Walmley team were skittled for just 98 with their opposition that day putting on 327. But you reap what you sow, and two and a half years of hard work, maturity and expert coaching throughout the summer and winter have come together to provide Walmley their first silverware.

In front of a packed terrace at Eldon Drive (and an even more packed car park!) Walmley won the toss and chose to bowl. The first two overs from Dylan and Freddie both provided maidens for the aforementioned bowlers and it wasn’t long before Freddie provided the first breakthrough. At the end of the first pair Dunstall were 198-1.

A further over from Freddie and Raheel and two for Kanav in the third pair saw equally economical bowling and a fantastic wicket for Kanav that reduced Dunstall to 207-2 after 8 overs.

Walmley’s spinners took on the third Dunstall pair with incredibly economical figures. Ariyan’s first over went for only one run and a run out was engineered from it with sharp work from Bryan behind the stumps who was filling in for the injured Aarav.

The final Dunstall pair batted well and their skipper Monty put on a fine 14 not out in the face of excellent bowling from Umer, Daniel and Bryan. This was blunted by a sharp run out for Walmley and fine wickets from Umer and Bryan seeing Dustall end their innings on 196-7.

Walmley’s response saw a batting display that demonstrated maturity and patience. A credit to this young side. Walmley saw out their 16 overs without the loss of a single wicket.

Walmley’s second batting pair of Raheel and Umer put a further 25 runs on the scoreboard and Walmley were surging ahead at 236-0.
Raheel 2*
Umer 7*

The third batting pair of Kanav and Daniel took the lead of their team mates and played sensibly and safely with Walmley ahead in the game. Still yet to lose a wicket after 12 overs Walmley were poised at 253-0.
Daniel 6*
Kanav 5*

The final pair of Bryan and Ariyan put the cup firmly out of reach with a magnificent innings from Ariyan who scored 21 off 19 balls, ably assisted by Bryan who scored 3 runs from 5 balls. Cue celebrations not yet experienced from these players.

The pizza and J2Os flowed. A fabulous achievement.

Dunstall are a fantastic side with two players who had never played hardball cricket until this season. Players, parents and management are an absolute credit to their team. We wish them well for the future. They are a club who play cricket in the right spirit and we look forward to some future fixtures with them. A very classy club.