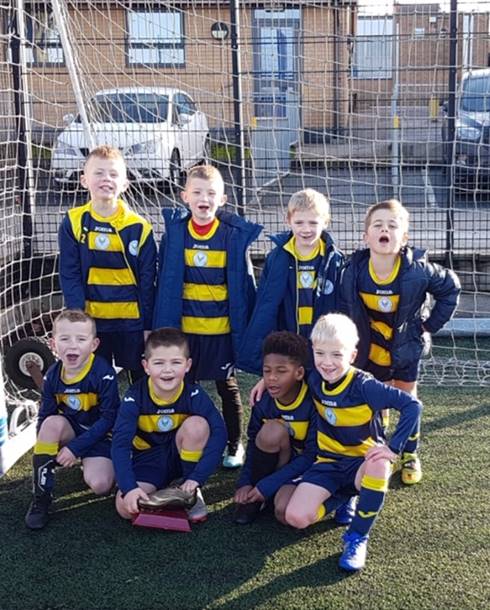 The Sunday morning begins with delays on the motorway, festive cheers and a whole lot of wind.

The game starts with the team of Connor in goal, Jake in defence, Jacob taking a central role, Cohen on the left and Zac on the right.

Once the ball was able to stay still on the centre spot for more than a second the game started, and Jacob took the opening touch.

The wind was so strong that it was difficult for parents to even stand upright let allow me even to attempt to make some notes (What I would have given for another swimming gala this weekend!) So, the game starts, and the ball is struggling to be controlled by either team passes would not connect, and the ball followed the wind.

Cohen controlled the ball down the side and made an attempt on goal it was cleared by the goalkeeper who lost the ball to his own player who tapped it back (fortunately for Colron) tapped it too strong and it’s an own goal. 1 up for Colron.

Jake then makes an array of clearances to force the ball out of play, due to the epic skills of number 10 from Brewood.

The game didn’t really move much up or down the field for some time. It was a game of ball in play, ball out of play, which was lucky for Brewood as the wind decided to move to super strength and move their goal. The manager then continued most of the half keeping it in place.

The ball then made its way to Connor who saves the ball, Zac takes the goal kick, but his power blasts are never going to fight against that wind and it goes wide. The ball makes its way back to Connor but this time Zac’s ball is blocked by the player.

Zac then takes on a good run but is blocked, the ball is up for the taking and Jacob gets a touch forcing it back to Zac and with a turn and a kick it’s in the net.

Cohen pushes up the field to help out Jake and takes good control of the ball. Unfortunately keeping control in these conditions was difficult.
Jake then makes a risky back pass to Connor, which is kicked out by Connor and half time called.

There is a slightly delay to the start of the second half as the wind takes hold of our top trumps cards and they enter the field.

Order has been resumed and the second half starts with Kyrie in Goal, Tyler on the right, Fisayo in the centre, Cohen on the left and Zac R in defence.
The game starts with us gaining possession for a short while and some football is seen with Zac taking a throw in to Cohen who makes his way forward with his efforts blocked.

Another throw in sees the ball go from Zac to Fisayo to Tyler who makes a great run into space looks up with great skill and passes to Fisayo in the box, just wide from Fisayo.

Fisayo and Tyler continues this connection this time Fisayo passing to Tyler who is just wide. Tyler speed, determination and persistence in these conditions needs well deserved recognition.

Zac takes on his defending with a good clearance at an important part of the game.

Fisayo takes a superb throw in reading the game well to Cohen who battles through and is just wide.

The pressure is starting to be applied now by Brewood and Kyrie steps up as a top goal keeper. The wind was so strong now, Kyrie struggled occasionally to clear the ball far as the wind was a force to be reckoned with. Kyrie continued to make a flurry of saves, well done Kyrie.

Kyrie cleared the ball to Fisayo who made a pass up the field to Tyler, back to Fisayo, back to Tyler who took a powerful shot which was saved but this didn’t stop Tyler. The goal keeper dropped the ball and with a turn Tyler scored (the ball was only going one place in Tyler’s mind).

The ball is back in play and Zac makes a clearance into the sky (We were unsure when it was coming back down).

Kyrie then continued his clean sheet by making more great saves. Fisayo/ Zac and Cohen continued to attempt a good run up the field but were faced with a wall.

The game ended with a long run up the field from Zac who passed to Tyler who tried effortlessly to keep it in play.

The game is over it’s a win for Colron. A game where the ball spent more time off the field than on due to the wind.

Well done Blues this was a good effort in such horrendous conditions. And apologies for all the parts of the game I missed. It was fight for survival on the side-lines.